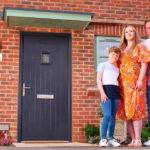 Watford Community Housing recently celebrated the completion of its 500th newly built home, with the landmark being reached at Fairways Farm, Bucknalls Avenue in Three Rivers. Since being established in 2007, the housing association has been committed to providing high-quality affordable homes in Watford and beyond.

Developed by Inland Homes, Fairways Farm comprises 100 new homes for mixed-tenure. Of these, Watford Community Housing owns and manages 45 affordable homes through the development’s Section 106 agreement, which ensures that a percentage of the new homes built are for affordable housing. The shared ownership properties include a four-bed house and 11 one-bed and two-bed flats, and there are 15 houses and 18 flats for affordable rent.

This is the first project between Watford Community Housing and Inland Homes, and it has been completed despite the challenges presented by the coronavirus crisis, which meant that the site had to be shut down temporarily. However, strong teamwork ensured that work swiftly resumed and residents were able to start settling into their new homes as quickly and smoothly as possible.

In August, Watford Community Housing welcomed the occupants of its 500th ever newly built home — Louis, Cora and their children, Mason and Edan (pictured above).

Louis explained: “We spotted the house when it came onto the bidding list and we thought it looked beautiful. We were delighted and there were even a few tears when we were told we’d got it. When it was being constructed, we drove down here quite a lot to see it being built.

“We love that it feels a bit like a rustic cottage, with little touches like the green windows — they’re fantastic. The quality is amazing and there are some really nice touches like the external lights, the numbers and the outside tap.

“It’s perfect for us. We spent nine-and-a-half years in a one-bedroom flat with Mason, ever since he was born, so now he’s got his own room for the first time. It was fantastic to come in, spend a bit of money and get it all how we want it. We could never consider buying our previous flat because it was too small for us, but in the future that might be an option for us too, which is amazing.”

Cora added: “It’s been nice to have a blank canvas and make it our own. It gives us a lot more space and it’s lovely. There are just the right amount of houses in the development for a community and we’ve got the park too, which is great.

“We’re really happy — we pinch ourselves every evening when we sit here, because it feels like it’s a holiday home and someone’s going to come and tell us we have to leave!”

Tina Barnard, Chief Executive of Watford Community Housing said: “We are delighted to welcome Louis, Cora and their family into their new home. This beautiful development has provided homes for shared ownership and affordable rent, to ensure people have the chance to live comfortably and happily in a home they can afford.

“We’re really proud to have achieved the landmark of our building our 500th new home. Our commitment to delivering high-quality homes and friendlier communities has been at the heart of each of our developments over the last nine years, and we look forward to bringing more much-needed affordable housing to families in South-West Hertfordshire.”

Watford Community Housing’s first newly developed homes were built in Alma Place, which was initially a pocket garage site sat within the Meriden, Garston. This project was completed in early 2011 and provided six houses — four two-bedroom terraces and two three-bedroom semi-detached homes for social rent. The site also included the refurbishment of 12 existing garages at the time.

Since then, Watford Community Housing has gone on to deliver a range of projects, providing modern affordable housing to suit a variety of needs, alongside important and much-needed community spaces. More recently, these have included larger schemes such as the redevelopment of The Brow, while works are ongoing at the Meriden on a regeneration scheme that will provide 133 new homes, including a flexicare facility for older people, a new parade of shops and new green spaces. Watford Community Housing has also expanded into new areas such as Hertsmere and Dacorum, to provide affordable homes further afield.

To generate further funding for these affordable homes, Watford Community Housing has also started to deliver homes for private sale through its commercial arm, Clarendon Living. As well as building homes for sale on the open market, Clarendon Living works with local authorities to provide high-quality affordable housing through joint venture companies — these are Hart Homes, in partnership with Watford Borough Council, and Three Rivers Homes, with Three Rivers District Council.