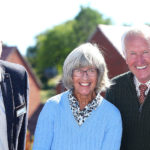 A Warwickshire landowner has spent 30 years helping to ensure that local families can afford to live in the rural communities they know and love.

Paul Bellew and his wife, Margaret, have been working in partnership with Warwickshire Rural Housing Association since 1989, providing land to enable local people to remain in the Warwickshire village of Stretton on Fosse.

The former butcher says he was inspired to make a contribution to the provision of affordable housing after inheriting part of his wife’s family farm and completing a number of barn conversions.

Paul explained: “We turned them into holiday lets and I was well aware, at the time, that there were local people who couldn’t afford homes in the village.

“I’d been brought up in a big family and we weren’t very well off, and it was very much instilled in us that giving was just as important as receiving. So, we decided to do something to balance things out, so to speak.”

Twenty years later, he again provided land for the second phase of the development, which saw an additional four properties completed during WRHA’s 20th anniversary year.

Finally, in 2019, the third and final phase of the development was completed, when five affordable homes were built on Paul’s land. This time the new development was named Dyas Green, in honour of WRHA Chairman and founder member, Derrick Dyas, who retired during the housing association’s 30th anniversary year.

All three phases of the development have been built specifically for people with a local connection to Stretton on Fosse, enabling local people to remain in the village where they have grown up, work or have close family ties.

Paul said: “When the first 10 homes were built in 1989, I was aware that there were a lot of younger people who simply couldn’t afford to get a mortgage and buy a property in the village.

“Although it has taken many years for all three phases of development to come to fruition, we feel very happy that, in some small way, we have helped to create something for the families of Stretton on Fosse to keep the village very much alive.

“I would encourage all landowners to consider giving a little piece of land at the right price to enable similar developments to go ahead in other villages.

“There is no doubt that 30 years after we started, the need for affordable housing for local people in our rural communities is as strong as ever.”

In addition to the land for new homes, Paul and his wife, who have now moved to neighbouring Mickleton to be nearer their daughter and two granddaughters, also gifted land for 10 allotments and an unspoilt orchard space for the people of Stretton on Fosse.

Paul added: “If you have lived a country life, you know how important these things are to people. We wanted to do what we could for the village that we were fortunate enough to call home for so many years.”

Warwickshire Rural Housing Association Company Secretary, Richard Mugglestone, commented: “Forging close partnerships is vital in our work to develop affordable homes for local people where they are most needed.

“We are extremely grateful to Paul for providing land in a village where people are being forced to move away due to high house prices. These new homes have transformed the lives of many people during the past 30 years and will continue to do so in the future.”