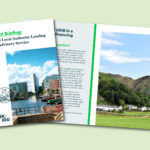 Writing for UK100, John Flint has previously acknowledged the importance of funding for local net zero projects, arguing: “Local leaders are seeking to deliver multiple interventions, simultaneously and at an unprecedented pace. In doing so they need to overcome well-known barriers to taking projects to investable stage — appropriate risk allocation, dealing with demand risk for new technologies, and of course long-standing capacity constraints and pressures in local government. Access to appropriately structured finance can be part of, though never the entirety of, the solution.”

Before concluding: “I am not naïve about the complexity of the multi-faceted problems we face. But I am optimistic that by working in partnership and challenging one another we can make a real difference. Doing things the way they have always been done will not deliver the change we need — either in the ways we generate and use energy or how we drive clean growth across all parts of the UK.”

Commenting on the briefing and UKIB’s establishment in law, Polly Billington, Chief Executive at UK100, said: “The UK Infrastructure Bank can play a vital role in helping local authorities work with private finance to fund key projects to deliver on net zero while supporting local and regional development and growth — we welcome its establishment in law.

“And while we also welcomed the Chancellor’s recent instruction to support energy efficiency projects, we’re concerned about the narrow scope suggested by the new UKIB bill — accelerating action on net zero requires investment in a diversity of complementary and interrelated projects, from nature recovery to retrofit.”

Polly added: “We want to see UKIB work closely with the Department for Business, Energy and Industrial Strategy and the new Net Zero Hubs to develop funding solutions and approaches to net zero investment that build local development capacity on a financially sustainable basis.

“As well as a finance provider, UKIB should also consider its role in project development, mirroring the role played by other leading publicly-owned investment and development banks such as the European Investment Bank (EIB) and the Inter-American Development Bank (IADB).”

Esrlier this week Tracy Brabin, Mayor of West Yorkshire, and Cllr Richard Clewer, Leader of Wiltshire Council, were announced as the first-ever Co-presidents of the UK’s only network of climate ambitious local and regional leaders.