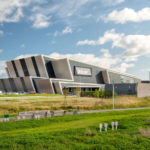 The Event Complex Aberdeen (TECA) has been lauded for its social impact at a prestigious awards ceremony. The Royal Institution for Chartered Surveyors (RICS) selected TECA as winner in the Commercial category at its inaugural Social Impact Awards for Scotland.

Comprising the P&J Live arena and two on-site hotels, the £333m events campus officially opened its doors to the public in September 2019 following a three-year build. Robertson served as main contractor on the project, which was a joint venture between Aberdeen City Council and HBD, formerly Henry Boot Developments.

The awards celebrate projects which deliver economic, social or environmental improvements in communities. Judges said that that TECA “demonstrated very good collaboration with a range of stakeholders and was delivered on time and on budget”.

All eight category winners were announced digitally by RICS and will now be put forward to the UK-wide Grand Final which is due to take place on 24th September in London.

The project, which is Robertson’s largest ever, has won several awards. In February, TECA scooped two titles at the Scottish Property Awards, including the prestigious Development of the Year.

The venue has been hailed as an example of best practice within the UK construction industry and is playing an integral role in enhancing Aberdeen’s reputation for innovation.

Liam Hanlon, Managing Director, Robertson Major Projects, said: “TECA has already proven to be a fantastic addition to Aberdeen with clear economic benefits for the wider region. It continues to receive recognition and we are particularly pleased that RICS has highlighted the social impact the project has had. As the judges mentioned, collaboration was key and we worked firmly in partnership with the customer and developer to ensure that TECA not only met expectations but exceeded them.”

Ed Hutchinson, Managing Director, HBD, added: “HBD is proud to have been part of the team that delivered this iconic venue and to win a RICS Social Impact Award for the development along with Aberdeen City Council and Robertson is something that we’re extremely honoured about.”