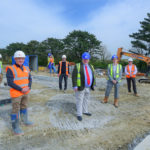 Social landlord Coastline Housing has officially marked the start of a project to bring 26 new affordable homes to a site in St Columb thanks to funding from Homes England.

The housing charity will be providing 15 homes for affordable rent and 11 for shared ownership on land at Station Road. Project partners celebrated works getting underway with a socially distanced commemorative photo that saw Mayor Cllr Paul Wills and other local Town Councillors invited onto the site.

The homes, which will be a mixture of one-bedroom flats and two- and three-bedroom houses, are due to be completed in March 2022.

As these homes start to come out of the ground, a second Coastline Housing development at Hawkens Way in St Columb nears completion. This site comprises 28 new affordable homes and residents are due to move in this summer. Both schemes are being built by South West based contractor EBC Partnerships.

The developments came to fruition thanks to strong support from St Columb Major Town Council, with Councillors keen to engage with Coastline and bring new affordable homes to local families and individuals who are very keen to stay in the area.

Allister Young, CEO of Coastline Housing, said: “The last 12 months have been difficult for many communities in Cornwall, but Coastline’s commitment to building a great future for Cornwall has remained.  We are just about to finish some new homes at Hawkens Way, so it was great to be able to celebrate starting on site with a new scheme of much needed affordable homes in the town.  We’re really grateful to the Town Council and local people who have helped and supported us in getting to this stage.”