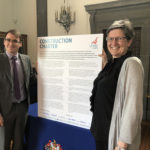 Unite’s pioneering Construction Charter got the backing of Southampton City Council on Monday 17th June in a major boost for the region’s construction workers.

Cllr Christopher Hammond, Leader of the council joined Sarah Carpenter, Unite Regional Secretary for the South East to sign the charter at a ceremony at Southampton Civic centre (pictured above).

In the South East Milton Keynes, Hastings, Brighton and Crawley councils have also signed up to Unite’s Construction Charter.
Construction firms planning to work on Southampton City Council building projects will now need to adhere to the new Construction Charter. The charter commits to working with Unite in order to achieve the highest standards in respect of direct employment status, health and safety, standards of work, apprenticeship training and the implementation of appropriate nationally agreed terms and conditions of employment.

“The right to speak out on issues and be paid a fair rate for the job is vital. The Charter means there will be no blacklisting of workers. It also protects workers from bogus self-employment by ensuring construction workers are directly employed. The Charter also helps local workers to operate in a safe environment including giving them the rights to raise health and safety issues without fear.”

Cllr Christopher Hammond, Leader of Southampton City Council commented: “Southampton is an exciting city to live in. We’re a place of opportunity and one of the fastest growing cities in the UK.

“Our growth has been assisted by the investments made by the council and companies who want to see the city develop. But this development shouldn’t come at an unfair cost to workers in the construction industry — which is why we’re pleased to sign Unite’s Construction Charter.

“Residents can be assured that developments will follow safe and ethical practices, and workers will have adequate safeguards when working in Southampton.”

Mark Wood Unite Executive Member for the South East added: “We have construction workers in Southampton paying £20-30 a week to payroll companies just to get their wages. By joining the dozens of other local authorities which have signed Unite’s Construction Charter, Southampton City Council is playing a vital role in cleaning the industry up and ensuring a fair deal for workers.”