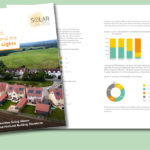 Over half of all local authorities already enforcing higher building standards 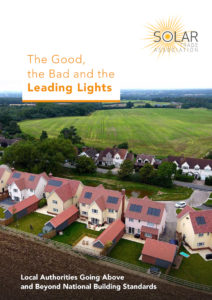 STA Chief Executive Chris Hewett said: “Good local new-build policies have played a vital role in the pushing housing developers to build greener homes. Our members are installing more solar roofs in those parts of the country where local authorities are taking climate change more seriously. The regulation of building standards is a particularly important area in which local administrations have powers to determine higher, more stringent requirements than those set out at national level and can act to improve said standards without financial constraint. We applaud the local authorities that have established higher standards and the vital contribution they are making in the drive towards net zero greenhouse gas emissions by 2050.”

The built environment contributes to approximately 40% of the UK’s emissions share with energy use in homes accounting for about 14% alone. The Government last week published a consultation on the Future Homes Standard, which puts forward proposals that would lead to over 30% reductions in carbon emissions for new dwellings by utilising low-carbon energy technologies such as solar. Some concern has been raised regarding whether these proposals will limit the ability for local authorities to set higher standards in the future.

UK100 Director Polly Billington said: “The Government is proposing to limit the ability of local authorities to help the UK meet its net zero target by setting national standards as a ceiling when they should be a floor. Many of our members, including Milton Keynes, Bristol and East Dunbartonshire, have set building regulations and planning guidance to drive higher standards for new homes, making homes more affordable to run as well as reducing the contribution to climate change. The fact that more than 50% of local authorities already exceed national standards demonstrates the ambition of local leaders, which should be supported by national government.”

Milton Keynes is identified as having one of the most progressive policies among local authorities. Their local plan, which was adopted in March 2019, sets out four key requirements:

1. Implement the Energy Hierarchy within the design of new buildings by prioritising fabric first, passive design and landscaping measures to minimise energy demand for heating, lighting and cooling.
2. Review the opportunities to provide energy storage and demand management so as to tie in with local and national energy security priorities.
3. The design of buildings and the wider built environment is resilient to the ongoing and predicted impacts of climate change.
4. Development proposals for 11 or more dwellings and non-residential development with a floor space of 1,000 sq.m or more will be required to submit an Energy and Climate Statement

The Energy and Climate Statement requires developers to set out how their proposals will achieve a 19% carbon reduction improvement as required under national planning policy, and provide on-site renewable energy generation, or connection to a renewable or low carbon community energy scheme, that contributes to a further 20% reduction in the residual carbon emissions.

The Greater London Authority’s unique powers has enabled the city to drive leading policy in the form of the London Plan, which sets the strategic framework for planning policy across the Capital.

A statement from the Office of the Mayor of London notes: “London has a strong track record in climate leadership and taking ambitious actions to reduce our carbon impacts, a key part of this has been our continued commitment to reducing the carbon associated with development through the London Plan. These policies set a clear pathway to zero which is why we introduced the zero carbon homes standard in October 2016 despite there not being an equivalent policy at the national level. Strong support from stakeholders has been a vital part of the policy’s adoption.”

Scottish local authorities continue to edge their English counterparts owing to higher national standards established by the Scottish Government. These higher standards have not affected housebuilding levels in Scotland, with steady development of more than 15,000 homes a year for the last four years running. Anecdotal evidence provided by STA Scotland members indicates that more that 80% of new dwellings in Scotland are now built with solar.

0 0 0 0
Previous : Voice of the Architect | At the coalface
Next : New £25m constabulary HQ in Lancashire celebrates official opening