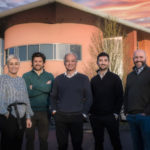 Seddon — the UK’s largest privately owned and family managed national contracting business — is marking its 125th anniversary with a series of events and pledges that will celebrate this most incredible milestone, bring people back together and raise over £1m for charity.

The fifth generation, family-owned business, headquartered in Bolton, has asked colleagues, customers and its supply chain to come up with their own personal pledges that pay homage to the notable number, whilst raising money for The Christie Charity. So far, these include a challenging 125 mile walk, a 125-hole round of golf and a 125km swim.

As well as celebrating a century and a quarter in business — only three out of every 100 family businesses make it through to the fourth generation and beyond — Seddon hopes that its endeavours will help it fundraise £1m for The Christie Charity, as well as raising money for other worthy causes that are close to participants’ hearts.

Founded in 1897 by George and John Seddon, what started out as a Salford-based bricklaying business, today employs over 650 people and has an annual turnover of £200m.

Nicola Hodkinson, Seddon family member and Company Director, said: “125 years in business is a huge deal, so we’re going all out to mark the occasion with the gusto it deserves whilst raising as much money as we can for a charity that’s so close to our hearts.

“It’s timely that our anniversary falls as we’re starting to reconnect post-pandemic, so we hope those who take part will see it as a perfect opportunity to get back together with colleagues and friends, in support of each other’s efforts.

“Commercially, the milestone has also prompted us to really focus on our future, to ensure that we’ll still be building homes, schools, healthcare facilities and commercial premises in another 125 years.

“Our children have now entered the business and are cutting their teeth. Along with my brothers Jamie and Jonathan, I’m mentoring them on how to be business owners. They’re also moving around the business to gain experience of it and the industry as a whole.

“In the words of my father Christopher, it’s our job to make the next generation the best owners they can be. And that’s exactly what we’re doing, for the longevity of the Seddon name.”

Roger Spencer, CEO of The Christie NHS Foundation Trust, commented: “We’ve worked with Seddon for over 25 years, and, during that time, they’ve raised a phenomenal £875,000 for The Christie Charity.

“It’s really exciting to be part of its latest year-long fundraising campaign, which we’re all hoping will see Seddon surpass the £1m mark. The pledges we’ve heard of so far are fantastic and are sure to raise lots more money. The generous donation of £250 from every Seddon Homes house sold to The Christie at Macclesfield, which opened in December, is also predicted to add an incredible £175,000 to the current total during 2022.

“It’s certainly set to be a very special year and we congratulate Seddon on what is an absolutely fabulous achievement.”