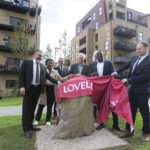 Danny Thorpe, Leader of Royal Borough of Greenwich, has officially marked the completion of Trinity Walk, a £100m regeneration housing scheme built by Lovell in Woolwich.

A special commemorative event, hosted by Lovell and PA Housing, showcased the new development which is now a thriving new community for families, singles and couples.

Starting in 2016, the partnership between Royal Borough of Greenwich, Lovell and PA Housing has delivered over 684 energy-efficient new homes, including 239 affordable properties, over the last five years, on a former 1960s council estate.

Over 100 residents enjoyed a special family fun day which included a range of entertainment including circus skills.

Lovell believes Trinity Walk is a shining example of how a specialist partnership housebuilder, a local authority and a housing association have worked collaboratively to tackle the need for affordable housing caused by a growing population and house price rises across London.

Councillor Danny Thorpe, Leader of Royal Borough of Greenwich, said: “This regeneration project has brought hundreds of state-of-the-art, energy efficient homes to the borough while also sparking job creation and economic growth. Through a dedicated programme of investment, partnership working and housebuilding, alongside other initiatives like our Greenwich Builds council home-building programme, we are truly changing the face of this borough for our residents.”

Councillor Thorpe added: “This collaboration with Lovell has shown how an area can be rejuvenated while meeting housing need. Woolwich is currently undergoing a transformative programme of regeneration to provide new homes and infrastructure as well as town centre improvements.

“This development sits right at the heart of Woolwich and has allowed many young people and families to remain in this part of London.”

Location is key to the architect-designed Trinity Walk with the new Crossrail station located just a mile away allowing commuters a seven-minute journey into central London and the development is a short walk to Woolwich centre.

Lovell Regional Managing Director, London and Southern, Stuart Gibbons said: “It was important to mark this completion of the Trinity Walk scheme. I’d like to thank everyone at Lovell Homes, as well as all our partners for helping us deliver this fantastic scheme. Local people and residents recognise that Trinity Walk is fast becoming an impressive community as well as a lovely part of London to live in.”

Stuart added: “Our vision was to create high-quality scheme with a strong sense of place, where people choose to live. The project has helped transform this predominantly social housing area into a vibrant mixed community of one, two and three-bedroom apartments, as well as three and four-bedroom houses.”

Dilip Kavi, Chief Executive at PA Housing, said: “PA Housing is committed to delivering affordable homes in the capital, and today’s event has been a great time to reflect on our work with the Royal Borough of Greenwich and Lovell, and all that we’ve achieved so far. The PA team, many of whom were at today’s event, are the people who will be providing ongoing housing management services to the residents at Trinity Walk and we look forward to being part of this community for many years to come.”

Royal Borough of Greenwich recently approved a £290m regeneration scheme for Lovell to build 766 quality new homes at another site in Woolwich.

The six-year project will see Lovell develop the former Morris Walk North and South estates into a mix of one, two, three and four bedroom houses and apartments.

Royal Borough of Greenwich appointed Lovell in 2013 as its development partner for the £398m One Woolwich programme, which will see the partnership housing specialist redevelop three older estates in the area. The first phase — Trinity Walk in the centre of Woolwich — has now been completed and built over 750 new homes. In total, the redevelopment plan will deliver 1,615 new homes over a 13-year regeneration programme.