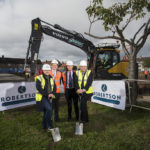 Work is now underway on a new nursery in Dundee which will cater for more than 170 children from next year.

Procured through Major Works – Scotland, part of the Scape National Construction framework, Robertson has been awarded the £2.5m contract by Dundee City Council to build the facility, which is located on Balmerino Road on the site of the former St Pius Primary.

The new nursery is scheduled to open at the beginning of the 2020/21 academic year. It will help Dundee City Council ensure that every child aged between three and five receives 1,140 hours of early education by 2020 — a key Scottish Government initiative.

It is one of several nurseries Robertson is building across Scotland, with other projects active in East Dunbartonshire and Fife.

Kevin Dickson, Managing Director, Robertson Tayside, said: “We have forged a strong partnership with Dundee City Council over the past several years, delivering numerous projects from schools to new buildings on the Waterfront.

“This latest project will help the Council to deliver on the Scottish Government’s objectives around access to early education. Our team is already hard at work and we look forward to making progress over the coming months at Balmerino Nursery ahead of welcoming pupils in August of next year.”

Councillor Alan Ross, Convener of the City Development Committee, said: “The start of work on this site is a tangible sign of our commitment to delivering nursery buildings in Dundee for more of our children that are bright and accessible teaching and learning spaces.”

Councillor Stewart Hunter, Convener of Dundee City Council’s Children and Families Services Committee, added: “The children who are at the heart of this expansion in provision will be in some of the most modern and tailor-made facilities we can offer, and that will give them the best possible start on their educational journey.”

The start of work at Balmerino comes as Robertson celebrates completion on another major project for Dundee City Council. Menzieshill Community Hub opened its doors to the public just last week, with the £9m project offering local people access to a range of modern facilities, including two sports halls, seven activity rooms, a cafe and library.

Mark Robinson, Scape Group Chief Executive, said: “The Early Years Foundation Stage is so important to forming a child’s educational experience, and by building engaging and innovative teaching spaces like this, pupils will surely make a strong start to their academic life.

“By delivering this important project via the Major Works – Scotland framework, Dundee City Council will not only receive a high quality building, but they also ensure that the project will be delivered quickly and that project spend will remain within their local community.”