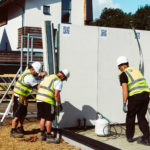 Modular homes provider Project Etopia has begun building a landmark demonstration home at the Building Research Establishment (BRE) with the aim of being the first to meet a new UK offsite construction standard.

The weather and fire resilient home being constructed at BRE’s Watford Innovation Park is intended to be the first modular home in Britain to be awarded the body’s soon-to-be-released BPS 7014 Standard for Modular Systems for Dwellings certification, the UK’s first offsite construction standard.

Introduction of the standard promises to be a watershed moment for the offsite construction industry.

Ground was broken on 4th September by Project Etopia CEO Joseph Daniels and the company’s Chairman, Lord Stanley Fink and the ground floor was completed in just two hours.

The building — which uses Etopia’s panelised build system — will be a leading example of how modular housing can embrace eco-technology to create high-quality, greener homes that significantly reduce electricity bills for consumers. Project Etopia homes are built on average three times faster than traditional builds.

BRE’s BPS 7014 will assess levels of performance of buildings using Modern Methods of Construction (MMC) against sustainability and building standards.

Project Etopia’s house will be tested for its ability to withstand hurricanes, fires and floods. It will be thoroughly evaluated to prove it can match up to — and surpass — the equivalent Building Regulations as bricks and mortar homes.

The panelised walls in Project Etopia’s home possess a U-value of 0.13, which is superior to the 0.16 U-value for a typical well-insulated wall in a new-build brick property.

The build cost of the 108sqm three-bedroom detached house is around 20% less than a conventional home.

Joseph Daniels, CEO of Project Etopia, commented: “We set out to be at the leading edge of the offsite construction sector and the fact that we are at BRE building the first demonstration home intended to meet the UK’s first modular construction standard is testament to that.

“The team has worked so hard and it’s an incredibly proud moment. Our hope is that the work we do here is also hugely positive for the whole industry.

“In years to come, people will look back at BRE’s introduction of BPS7014 and pinpoint that as the moment modern methods of construction really went mainstream. It’s fantastically exciting for the UK housing market and there is now everything to play for.”

The first home in London’s only modular commuter village, Etopia Corby, has been completed. To find out more about the project click here for more details. 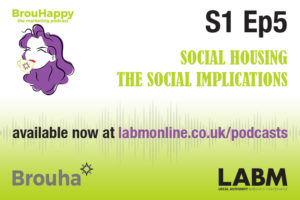