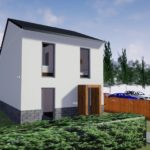 Modular homes provider Project Etopia will begin building a new weather and fire resilient demonstration home at BRE’s Watford Innovation Park in April, with a target of being the first to be awarded BRE’s BPS7014 Standard for Modular Systems for Dwellings certification.

The building will be a leading example on how modular housing can embrace eco-technology to create high-quality, greener homes that significantly reduce electricity bills for consumers. It will also have its ability to withstand hurricanes, fires and floods put to the test.

The 108 sqm three-bedroom detached unit will come in at around 20% less than a conventional home — around £1,200 a sq m for a smart home, which compares with build costs of around £1,500 sqm for a basic traditional bricks and mortar.

Its panelised walls will possess a 0.13 U-value, a measure of thermal efficiency, compared with a U-value in excess of 0.16 for a typical well-insulated wall in a new build brick property. All of the exterior wall superstructure will be constructed in an on-site time of 20 hours (16 hours for walls, four hours for scaffolding) compared with as much as three weeks for a traditional home. The Etopia build system is also not weather dependent.

The new industry certification scheme — known as BPS7014 — will ensure new modular buildings adhere to the highest sustainability and building credentials by certifying construction systems and components. Details of the certification will be unveiled by BRE this summer.

BRE was established in 1921 and is the world’s leading building science centre. Gaining certification and meeting the required standards earns developers global recognition for high-level performance.

Joseph Daniels, CEO of Project Etopia, commented: “We wanted to lead modular house building into the mainstream in Britain so our focus is to build to the new standard. Modular homes, including those built by us, are going up around the country with a finish of such quality that most people wouldn’t realise they were standing in a home built using offsite construction methods at all.

“We firmly believe this is the future and the new BRE standard is going to play a fundamental role in increasing demand for offsite construction over the next decade. Modular homes are now not just as good as traditional bricks and mortar but better, with smart energy-efficient technology woven into their very fabric.”

David Kelly, Innovation Park Director of BRE, commented: “With a growing housing shortage in the UK, the industry and government are looking to offsite construction methods to speed up the rate of supply to meet demand.

“The BPS7014 standard for Modular Systems for Dwellings will be launched by BRE this summer. It will assure all parties — occupiers, insurers, lenders, asset owners and developers alike — of the quality, durability and integrity of modular construction, by demonstrating that they have been subjected to a rigorous independent review, testing and certification process.”