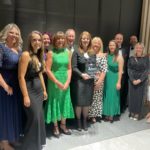 An affordable housing development in the Peak District has been named Best Residential Development at a property awards ceremony in the West Midlands.

Colonel Wright Close in Bakewell, which is owned and managed by Platform Housing Group, picked up the accolade against other small developments from around the region.

The site has 30 dwellings which were built using stone from the local Dale Park Quarry, a stipulation from the Peak Park planning authority who conserve the area. Constructors Lindum Group were behind the building along with Derbyshire Dales District Council and Pelham Architects.

The resulting homes meant Platform could offer homes to local people on low incomes who wanted to remain in the town they call home but might have otherwise found it hard to afford somewhere of such high quality due to the volatile housing market of the area.

Group Chief Executive Elizabeth Froude collected the award and said: “It’s a fantastic achievement for the group and our partners that this scheme has been named as the winner. Building somewhere like this comes with its own challenges and this site took years of hard work to complete but seeing local families living there now makes it all worthwhile.

“Everyone has always agreed that it’s a stunning development that fits so well within the local area, which we all know is one of the most beautiful in the country. Colonel Wright Close really does demonstrate the quality of affordable housing we can provide and I’d like to congratulate everyone that worked on it from the developers and local authority o our lettings and neighbourhood teams who’ve seen families move in and enjoy their new homes.”