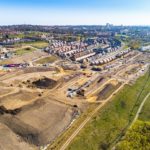 Planning permission has been granted for a further phase at The Rise in Scotswood, allowing the pace of homebuilding to increase with at least 200 new homes to be constructed over the next two years.

This approval follows the successful delivery of 382 new homes in the first phase of this exciting development by New Tyne West Development Company (NTWDC).

The uplift in construction is being supported by a £2.9m grant from the North of Tyne Combined Authority, earmarked specifically to stimulate housing initiatives on brownfield sites.

Alongside this, local community and charity groups will continue to benefit from up to £75,000 each year from a fund set up to support educational, art and environmental initiatives, including celebrating the area’s history.

Access to employment, schools and non development apprenticeships projects will also be backed, whilst on site, around 80% of the £120m investment is forecast to be spent with local suppliers and contractors, supporting further training opportunities, apprenticeships and job creation.

The increase in building comes after Keepmoat Homes bought out Barratt Homes’ interest in NTWDC — the joint venture behind the award winning* development.

Established by Newcastle City Council and the two developers back in 2011, NTWDC has, since building began in 2013, completed almost 400 homes — 332 for private sale and the remainder for affordable rent and shared ownership.

Director, Lee McGray, said: “Following several months of change, the planning consent completes the process of expanding development activity at The Rise. The pace of construction will help meet the increased demand for new homes, as we see the area grow from strength to strength.”

Cabinet Member for Development, Neighbourhoods and Transport with Newcastle City Council, Cllr Ged Bell, added: “It’s fantastic news that another 200 homes are coming to Scotswood. Already many young people and families have purchased a home on The Rise, raising the profile of the development.

“As a growing city, we urgently need new homes to keep pace with demand, and I must say it’s great looking across the river and seeing the homes taking shape.

“Of course, jobs are very important too as these are the building blocks of a strong economy, so I welcome the apprenticeships and the focus on procuring local suppliers, keeping the money right here in the local economy. This reduces the need to bring in supplies from further afield and along with the on-site heat plant that supplies energy to the homes will help reduce carbon emissions.”

Deputy Mayor of the North of Tyne Combined Authority and Portfolio Holder for Housing and Land, Norma Redfearn CBE, said: “As a combined authority with a mayor, we have secured additional money to open these sites up. We’ve worked hard, with our partners in the local authorities, to identify where best the money should be spent, to target where it will most benefit local communities.

“It puts us on the road to our ambition to build more affordable housing, breathe new life into disused sites and to make the North of Tyne a fantastic place to live, work and invest. Our commitment to community initiatives, local businesses, local schools, training and jobs remains strong and we look forward playing an even greater part in the revival of the city’s west end.”

When completed, The Rise will comprise around 1,800 homes with its own district heating system — already in place — and a neighbourhood centre, including community, retail and health provision space.

Keepmoat Homes has, in recent years, been one of the busiest private developers in Newcastle, delivering almost 800 homes across eight sites in the city since 2016.

Along with ventures in Glasgow, Edinburgh, Sheffield and Northfleet on the River Thames, The Rise is now one of the company’s key flagship projects.

The header image shows an aerial shot of The Rise in Scotswood.