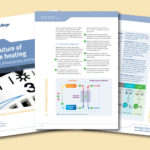 The Government must focus on rapidly increasing take-up of heat pumps in the next 10 years rather than investing in hydrogen technology for domestic heating if we are to cut household emissions in line with climate targets, a new report has found.

The research, produced by independent experts from Imperial College London’s Energy Futures Lab and commissioned by the MCS Charitable Foundation, concluded that hydrogen infrastructure is not going to be viable for domestic heating applications at scale for at least the next decade. The Government should deploy solutions which are available now, including heat pumps, energy efficiency and heat networks, and introduce new supports to make heat pump technologies more affordable for householders, the authors said.

The report comes as British Gas announced earlier this week of plans for a national rollout of remotely managed heat pumps to customers later this year, following a trial in South West England.

UK homes are currently responsible for 23% of carbon emissions, with the use of gas boilers a major contributor, but the report points to research that shows that replacing the gas network with hydrogen infrastructure would be a more expensive solution than installing heat pumps and could lead to a long delay in tackling emissions, jeopardising the UK’s ability to achieve net zero.

“With further investment in research and demonstration, hydrogen has potential to help decarbonise challenging sectors like industry and shipping, but right now there is not a strong case for using it to heat our homes,” said Imperial’s Dr Richard Hanna, one of the co-authors of the report. “In the near-term, the Government should focus its efforts on improving heat pump products and their affordability and supporting industry to rapidly scale up production of the technology in the UK.”

Increasing energy efficiency levels of existing housing stock, green financing and long-term grants to increase the rollout of heat pump technology would provide a boost to stimulate market growth and create tens of thousands of new jobs, the report found. Similar long-term initiatives in Germany, France and Italy have supported significant increases in heat pump installation rates over the past decade.

David Cowdrey, Director of External Affairs at MCS, said: “This report clearly shows that hydrogen will not play any significant role in domestic heating in the next 10 years, and may not be a viable option until 2050. It is time for the government to back proven, off-the-shelf, zero carbon solutions like heat pumps, which can be scaled up rapidly and electrify domestic heat. Through investment the UK can replicate what we’ve seen in many European countries, where concerted action has benefitted the low carbon heating sector.

“Plans for hydrogen to play a role in economically heating our homes should be reviewed. The cost of installing the required infrastructure, and producing hydrogen from natural gas, call into question whether it can play any significant role in helping us reach net zero emissions by 2050.”

The report also recommends the establishment of a heat pump council to coordinate consumer engagement and calls for investment in a national research, testing and training facility to ensure that heat pumps are designed and fitted to appropriate standards, boosting consumer confidence in the technology.

At present, hydrogen is predominantly derived from fossil fuels in energy intensive production processes which would have to be made low carbon. The report finds that hydrogen would be best deployed in sectors which are hard to electrify such as shipping and aviation
and used for heating only in areas where production is located close to industrial clusters.

The Government is set to conduct a consultation on the feasibility of hydrogen-ready boilers later this year whilst a decision on its use in heating systems has been delayed until 2026. The UK Climate Change Committee recently forecast that only 5% of the total heat demand would be met by hydrogen boilers by 2050 in order to achieve Net Zero by mid-century.