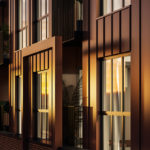 The Government’s plans for overhauling the planning process could deliver 120,000 new affordable and social homes to London alone, according to research carried out by Apex Airspace.

New laws laid in Parliament by Housing Secretary Robert Jenrick, which include changes to permitted development rights on private houses as well as those concerning upward extensions on blocks of flats and change of use of high street real estate, will enable local authorities, housing associations and private developers to deliver new homes at pace over the coming years.

Research undertaken by Apex Airspace found that across London’s boroughs, there is enough suitable existing buildings to add 120,000 new affordable homes. The findings were based on having the ability to extend properties upward by two storeys and figures were generated after an assessment of the number of buildings suitable for this purpose. Replicated across towns and cities in England and Wales, the move could create half a million social and affordable homes.

Apex Airspace was set up exclusively to promote, procure, and deliver rooftop apartment living across the Greater London area. It has secured funding from the Mayor of London and Homes England, along with an equivalent level of private equity finance to undertake the process of delivering 100% affordable housing in the Capital.

“For the first time in a generation, planning laws are being changed in a way that will have a long standing impact on the need to re-balance the housing sector and to deliver homes that people can afford to live in, in the areas they want to live. There is a clear need to address the revitalisation of town and city centres up and down the country. One obvious way of doing this is to reverse the trend of people moving away from living near high streets,” says Apex Airspace Developments CEO, Arshad Bhatti.

Bhattii believes that these new measures go a long way in addressing past concerns. He says: “Quite rightly, there is an emphasis now on the need for good quality design, space and lighting standards. This will mean that whilst there is increased flexibility, consent will only be considered for developers able to engage with this new planning reform in the correct way.”