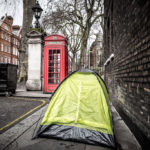 In a boost to ambitions to end rough sleeping in the capital by 2024, London Councils has announced the appointment of a Rough Sleeping Programme Director.

Michelle Binfield, who previously worked as Lead Commissioner for the Pan-London Rough Sleeper Substance Misuse Programme and Lambeth Council’s Associate Director for Commissioning (Public Health and Social Care), will start in August. She will play a key role in co-ordinating London’s cross-agency efforts to secure long-term accommodation for rough sleepers and prevent them from returning to the streets.

In her new role as Programme Director — which is based at London Councils and jointly funded by the London Housing Directors’ Group and the Ministry of Housing, Communities, and Local Government (MHCLG) — Michelle will work with London local authorities, the GLA, central government, health services, the voluntary sector, and others to build on the achievements made by working in partnership during the COVID-19 pandemic.

London faces major homelessness pressures and relatively high levels of rough sleeping. According to the latest snapshot count, the capital and the wider South East account for almost half of all rough sleepers in England. In response to the COVID-19 pandemic and the government’s ‘Everyone In’ initiative, around 5,000 former rough sleepers in London are now in settled accommodation. Approximately 2,500 people remain in short-term emergency accommodation such as hostels and hundreds more are still on the streets, according to data supplied to London Councils by the boroughs.

London boroughs — together with the GLA and national government — are committed to reducing these numbers and improving outcomes for rough sleepers. Through securing long-term accommodation options and other support, the aim is to meet the Government’s goal of ending rough sleeping by 2024.

Michelle Binfield said: “No one should have to resort to sleeping on the streets. I’m determined to see London make faster progress in helping rough sleepers into accommodation and giving them the support they need to move on from rough sleeping.

“This will be an immense challenge, but I’m incredibly excited by the opportunity to work with partners across the capital and to make a real difference in rough sleepers’ lives.”

Cllr Darren Rodwell, London Councils’ Executive Member for Housing & Planning, said: “Rough sleeping isn’t inevitable and London’s response to the pandemic and the ‘Everyone In’ directive shows how quickly things can change for the better.

“This new post will play a key role in co-ordinating strategy and driving forward our shared ambition to end rough sleeping altogether.”

Eddie Hughes MP, Minster for Rough Sleeping and Housing, commented: “Tackling rough sleeping in London is key to meeting the government’s commitment to end rough sleeping by the end of this Parliament, and we have committed over £750m this year to achieve this, including funding towards this post.

“The Programme Director role will play a crucial part in achieving our shared ambition. I congratulate Michelle on her appointment and look forward to working with her, and other London partners, to build on the huge success of the ‘Everyone In’ initiative and provide rough sleepers with a route off the street for good.”

Jamie Carswell, Co-Chair of the London Housing Directors’ Group, said: “With her steadfast commitment to supporting rough sleepers and her years of experience in homelessness services across London, Michelle was the ideal candidate for this important new role.

“Reducing rough sleeping in London requires a wide range of partners all working together. As Programme Director, Michelle will be integral to successful collaboration in the capital and our pan-London efforts to achieve the best possible outcomes for rough sleepers.”

Tom Copley, London’s Deputy Mayor for Housing and Residential Development, added: “London’s response to rough sleeping during the pandemic saved the lives of hundreds of vulnerable people and demonstrated what we can do when national government, local government, health services and charities work together to tackle this crisis.

“However, there are still far too many people sleeping rough on the streets of London and I look forward to working closely with Michelle in her new role as we continue to push towards ending homelessness in London for good.”