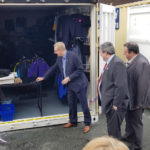 New Liverpool community shop stocks next generation up on self-esteem

The launch event took place at the new shops on Queens Road and was hosted by Councillor Gerard Woodhouse and highlighted the inspirational work done by the L6 Centre and all those who support it. Their work gives the local community, and particularly children, the opportunity and dignity to succeed in the future, despite the inequalities that exist in our society.

Through helping to meet basic needs such as food, clean clothing, school uniforms and mother and baby essentials, the centre is fulfilling a vital role in the community.

Whilst it is sad that facilities such as this are a necessity in this day and age, it is also hugely encouraging to see the resilience and togetherness of the community, volunteers and partners in meeting the needs of disadvantaged families in Liverpool.

Onward Homes, one of the largest registered providers of social housing in the North West, was recognised with an award for its partnership work in support of the centre, which it was proud to receive, and it continues to support the centre and refer individuals to the service to get the assistance they need.

One particularly poignant story from the day centred around the centre’s cash till. The till has no money in it, but enables children to believe their parents are buying the clothes and food rather than receiving handouts.

The children who make use of the centre are the future of our communities, so the importance of treating them with respect and dignity cannot be underestimated if we want our future communities to demonstrate these values too.

A camera crew from the One Show was also present to capture the event, which also saw awards and speeches from Mayor Joe Anderson, Unite General Secretary Len McClusky and Unite President Tony Woodhouse.

Whitefield Primary School Choir kicked the event on Friday 26th April off with three fantastic songs and their Headteacher also spoke passionately about the work done by the centre.

“We are delighted to work in partnership with the L6 centre,” said Onward Regional Director Donna Kelly. “The services they provide are going from strength to strength and it is inspiring to see the support they give to the local community.”