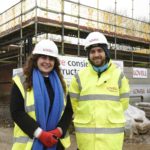 Denford Road — which includes 105 affordable and social housing properties — is being developed by Lovell Partnerships with Liverpool City Council and housing association Riverside, with funding from Homes England. Being the first major housing scheme for the city in 30 years, the development has enabled a cohort of local apprentices to play a role in a unique regeneration project for the city.

Jack Cross, an Apprentice Joiner at Lovell since November 2021, has been honing his craft during regular two-week periods onsite. While on his level 2 diploma course at Liverpool City College, Jack was selected to take part in a bespoke pre-employment programme — created by Liverpool City Council in partnership with Lovell.

Jack said: “Through this apprenticeship I have gone from strength to strength — developing my skills and receiving great support from my mentors and the whole site team. As a student, I’ve really benefited from working on the Denford Road scheme and particularly enjoyed the hands-on experience of the apprenticeship as well as getting stuck in to make the most of my first steps in the construction industry.”

Lovell has ambitions to continue expanding its apprenticeship programme to support trainees across a range of specialisms in the housebuilding trade.

Paul Woby, Social Value Manager at Lovell, said: “Jack has been fantastic on the project and it’s great to see the tremendous progress he’s made, acquiring knowledge and skills required both onsite and offsite, setting him up for a successful career in joinery.

“With the affordable and social housing project at Denford Road being heavily community-integrated with its site purpose, it’s fantastic that we have been able to enable employment opportunities for local residents — who are able to play their part in realising this long-awaited regeneration project.”

Plans are underway to provide additional construction placements on the site next year, as part of the City Council’s ‘Routeway into Construction’ short course that aims to provide students with four weeks of work experience placements across sites in Liverpool.

0 0 0 0
Previous : Planning permission granted for 16 new homes for borough rough sleepers
Next : Bromford commits to ‘earn and learn’ by joining The 5% Club