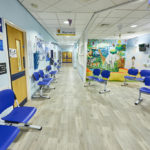 After nearly 30 years without refurbishment, the Paediatrics department at Ormskirk District General Hospital required a new lease of life to be injected into the building. With hospitals in operation around the clock by patients, visitors and staff, it was vital that the new flooring solution offered a combination of optimal performance benefits, whilst being quick and easy to install to minimise both disruption and downtime.

William Svarfvar, Capital Project Manager at Southport and Ormskirk Hospital NHS Trust said: “We have worked with Simon Turner at Forbo for many years on our flooring projects. When he first introduced us to the concept of Modul’up, my main concern was whether the product actually worked. After visiting St James’s University Hospital in Leeds, who had used Modul’up in the corridor areas, it was clear that the floors were faring well and there was no lasting damage from beds, foot or wheeled traffic – I was really impressed. 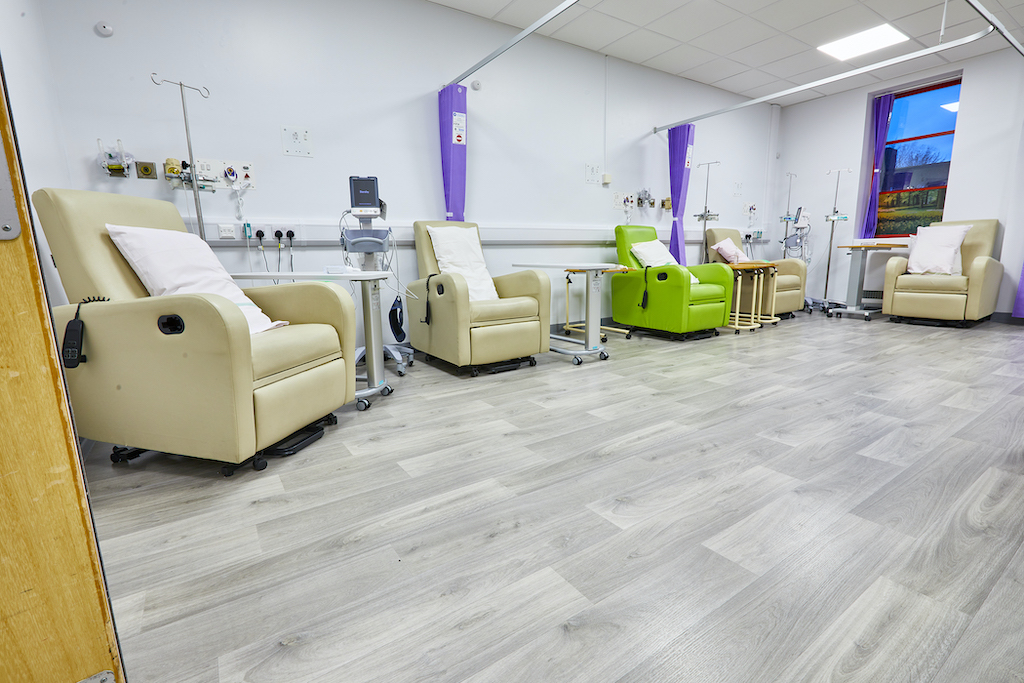 “We then decided to trial the product on an 8 Ward Refurbishment programme at our other hospital site, Southport & Formby District General Hospital, before then bringing it to the Children’s A&E and Children’s Ward at Ormskirk following its success. For us at the NHS Trust, the biggest advantages of Modul’up are its cost and time saving benefits. The fact that it could be installed over existing floors and they didn’t need to be stripped up meant that the fitters were able to complete the job quickly and easily, saving over 50% on installation time, and in turn contributing to our cost savings.”

Installed without the need for adhesives, tackifier or double-sided tape, Modul’up – part of Forbo’s Fast Fit collection – is a unique adhesive free sheet vinyl that offers excellent dimensional stability. Ideal for high traffic applications, it is easy to clean and provides outstanding indentation resistance. Thanks to the double structural stabilisation system, whereby two layers of fibreglass fleece are incorporated within the construction (compared to only one layer in standard vinyl), the sheet vinyl will not curl, ruck or roll once installed.

The Modul’up installation at Ormskirk Hospital took place during the A&E’s out of hours, between midnight and 8am. The advantages of using the adhesive free vinyl meant that the usual constraints associated with adhesives were removed, such as setting and drying times and lingering odours, contributing to better indoor environments. For hospital settings where hygiene is of utmost importance, Modul’up was easily coved using a cove former and the same single side tape system. Floors were also ready for use immediately after installation and the department could resume as normal when it reopened the following morning. 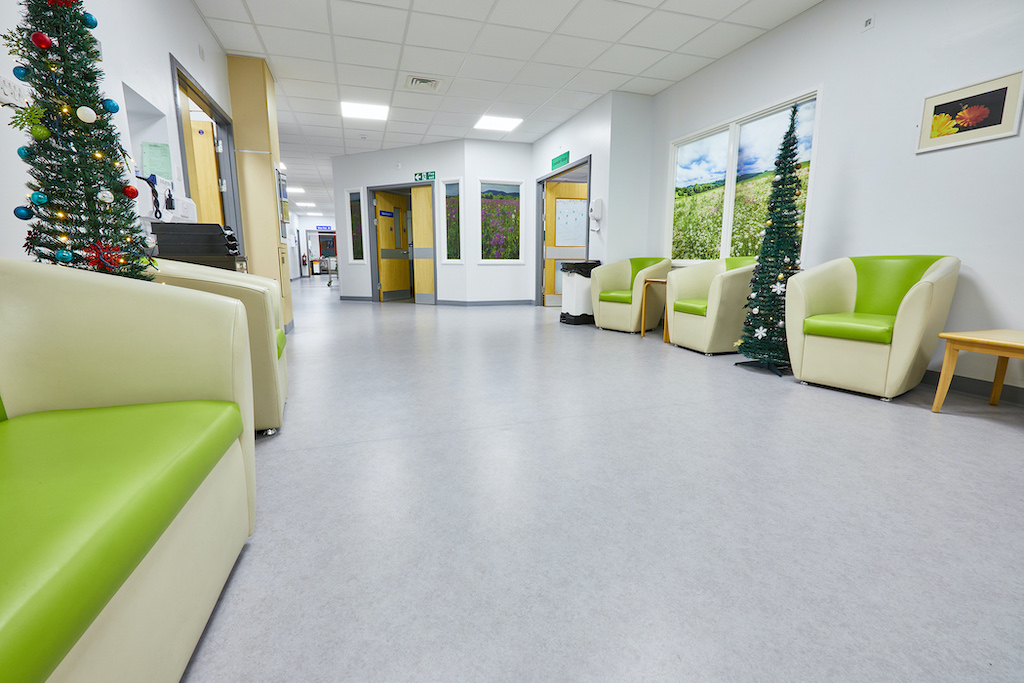 Speaking of the Modul’up installation at Ormskirk District General Hospital, Dominic Gillies, Account Manager at Crown Flooring, commented: “We completed the Modul’up installations overnight, Monday to Thursday, while the department was closed. The adhesive free solution saved us a lot of time as we did not need to prepare the subfloor and it was really easy to lay it over the existing vinyl. Due to the nature of hospitals, and particularly in the current climate, it’s important that tradespeople are able to get in and out as quickly as possible, and Modul’up enabled us to do this whilst still completing the job to an excellent standard. I would definitely recommend using it on further projects.”

William continued: “In terms of the design, the Modul’up Compact collection hosts a wide array of finishes. The concrete and wooden plank effects offer a neutral alternative to the bright colours that are used throughout the Paediatrics department. Part of the Trust’s design strategy is to design dementia-friendly environments where possible throughout our hospitals, so for this reason, we have installed the Polar and Dove colourways in a number of areas, as it offers the recommended difference of Light Reflectance Value (LRV) between the floors and walls.” 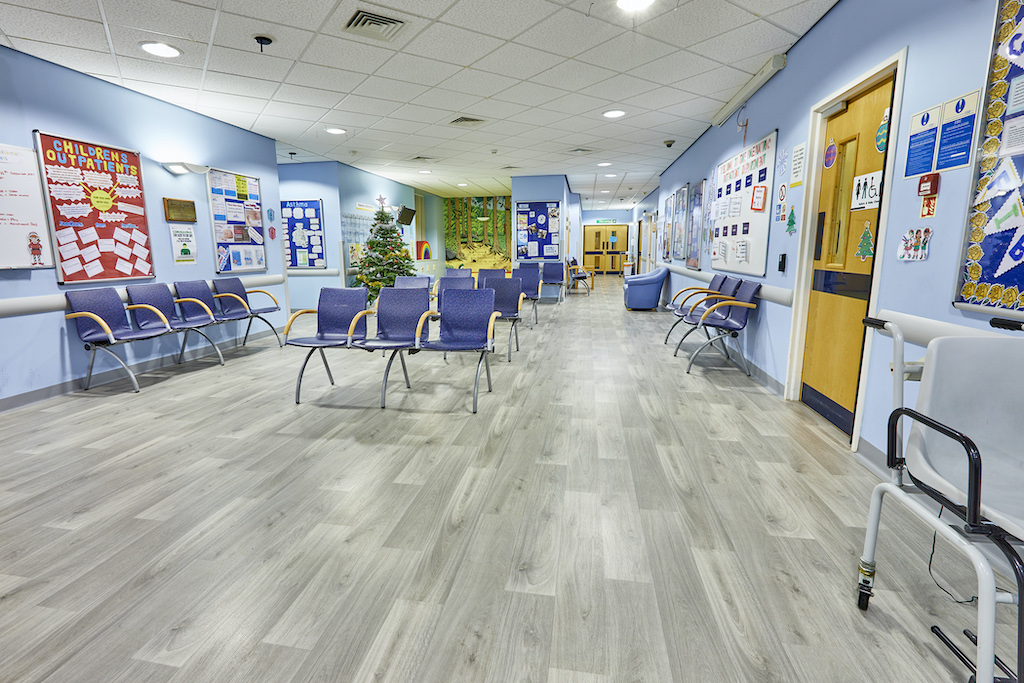 Modul’up Oak in Polar was installed in the A&E waiting areas, circulation spaces and side rooms. The plank detailing combined with the natural aesthetics of the oak shade offers a more contemporary design. Meanwhile the Dove colourway was chosen for the reception area and the Paediatrics staff and changing facilities. At the end of its service life, Modul’up is easy to uplift and reuse, or remove and recycle, offering a truly sustainable solution.

William concluded: “Beds are normally the root cause of flooring damage in hospitals as the shape of the wheels and the rolling up and down corridors, can historically cause lasting impact on the floors. With Modul’up, the product provided outstanding indentation resistance and I have not noticed any defects at all since its installation. I am really happy with the end result and we now use the product as standard in all of our projects. We have used it in several other areas of the hospital since the Children’s A&E and Children’s Ward.”

In addition to Modul’up, a whole array of floor coverings from Forbo’s portfolio were used for the refurbishment. Coral Classic in Anthracite was installed in the two entrance doors, whilst Sphera Element sheet vinyl in a series of vibrant colourways, including Yellow Green, Sun, Tangerine, Turquoise and Soft Lilac, were installed throughout the Children’s Ward. Products from the Step safety range in toilets, bathrooms and other areas that required slip resistance and a combination of Eternal Colour vinyl in Apple and Sphera Element in China Blue was also used to complement the safari themed wall mural in the Children’s A&E waiting area.

0 0 0 0
Previous : Construction industry praised for tangible progress on net zero at B7 Summit
Next : Warm welcome for fund that transforms homes