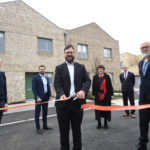 As part of its commitment to tackle the housing crisis in the city and provide new homes for local residents, Cambridge Investment Partnership has completed the first four brand new council homes at its flagship Ironworks development in Mill Road, Cambridge.

The development will create 236 new studio, one- and two-bedroom apartments and two-, three- and four-bedroom homes on the former Mill Road depot site, with half for private sale and half as council rented homes. The first council homes handed over comprise of a two bedroom home and three, four bedroom homes.

Cllr Richard Johnson, Executive Councillor for Housing at Cambridge City Council and CIP Board Member said: “It is really exciting to see these first council homes at Ironworks being handed over to local residents. This is our first development where we will be building a mixture of private and council rented homes, as well as a brand new community centre which will serve the wider community.

“Sustainability is also a key focus for us and we are creating attractive, energy-efficient homes which are fit for the future and are fully integrated into existing neighbourhoods.”

As part of the project, a brand new highly sustainable community centre is being built, as well a new onsite neighbourhood park, Eagle Park, which will feature a large play area, rainwater gardens and green open spaces. An extensive public art programme is also a key feature of Ironworks with £200,000 allocated towards four commissions. An additional £3.3m contribution will also be given towards local schools, parks, sports centres, NHS, Chisholm trail and open space adoption.

Tom Hill, Regional Director of Hill commented: “We are extremely proud of what is being created at Ironworks. The development has been designed to reflect the industrial  character of the area by combining bold and contemporary design to create a distinctive collection of homes, in keeping with the aesthetics of the area and providing a seamless transition between the private sale and council rented homes.”

As part of this development, the Chisholm Trail will see a new leg added, opening up a North-South route for pedestrians and cyclists in the city centre which has been closed to the public for over 100 years.

0 0 0 0
Previous : Wates dedicates month of October to inclusion
Next : ENGIE zeroes in on carbon emissions with launch of home retrofit model