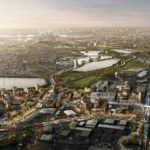 Delve into Enfield’s heritage during Open House London and celebrate the borough’s past and future, including a tour of the landmark Meridian Water project.

Meridian Water — where 10,000 homes will be built and thousands of jobs created — is just one of 23 locations in Enfield opening their doors to tours during the weekend of 21st and 22nd September.

The tour of Meridian Water will provide an insight into the masterplan for the bold and unique development, and will also take in the newly opened railway station and professional workspace Building Bloqs.

Enfield is in a unique position in that it has a wide variety of properties participating in the weekend representing the borough’s heritage, local businesses, sports, arts and cultural diversity. One of the oldest properties on the list is the Jacobean manor house at Forty Hall Estate while Energetik’s Energy Centre at Arnos Grove, home of the wholly Council owned heat network, is one of the more modern contributors.

Energetik and the Meridian Water site are new inclusions on this year’s Open House Enfield list, joined by a broad range of interesting new-comers including Chickenshed Theatre, a family home in Palmers Green, a tour of Perry Mead, Priory Hospital and Tottenham Hotspur FC’s training ground known as The Lodge.

Enfield Council’s Deputy Leader, Cllr Ian Barnes, said: “Enfield has a diverse range of buildings participating in Open House and this year the borough can boast its largest number of participants — we have examples of Gothic revival, fine examples from the Victorian industrial period all the way to 20th and 21st Century buildings that have a social as well as an architectural interest.

To find out more about the free tours and to view the full listings, visit the website. In addition the Council has adopted a new Heritage Strategy Making Enfield, which was developed in collaboration with community groups from across the borough. The strategy will sit alongside the development of Enfield’s Local Plan and will help raise design standards while also respecting all aspects of heritage.

Header image is of the Meridian Water Masterplan.