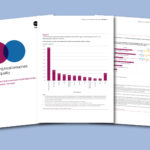 Cross-party mayors and local leaders from across the UK are today sending a joint letter to the Government pledging to meet World Health Organisation (WHO) targets on deadly air pollution by 2030, a decade ahead of the UK’s current 2040 deadline.

The pledge comes as a new report from the National Audit Office, released today, reveals the Government is failing to deliver on air quality standards.

The letter to Environment Secretary, George Eustice, coordinated by UK100 and signed by more than 20 mayors and leaders, including Mayor of London Sadiq Khan, UK100 Co-presidents Tracy Brabin and Richard Clewer, and Labour, Conservative, Liberal Democrat and Green leaders from across the country, is a joint response to the Department for Environment, Food and Rural Affairs consultation on “environmental targets”.

The latest intervention comes in the week of Clean Air Day and just weeks after the UK announced plans to halve the legal limits for the most dangerous air pollutant by 2040; PM₂.₅. Local leaders believe the Government needs to go further, faster.

PM₂.₅ is the deadliest form of particulate matter pollution, a broad term describing the mixture of solids and liquids, including carbon, chemicals, sulphates, nitrates, mineral dust, and water in the air.

PM₂.₅ particles are tiny enough to be invisible to the naked eye and small enough to pass through the lungs, get carried in the bloodstream, and pass into other organs.

Generally, they come from the combustion of solid and liquid fuels, power generation, domestic heating and road vehicles.

Recognising that PM₂.₅ pollution is linked to thousands of preventable deaths every year in the UK, the letter from local leaders calls on the Government to address the “limitations of local authority powers” and introduce a “national policy” to tackle “all of the different sources of PM₂.₅”.

The letter also urges ministers to:

Sadiq Khan, Mayor of London, said: “The passing of the new Environment Act last year should have provided the impetus Government needed to tackle some of the most pressing environmental concerns of our age.

“Instead, we’re being offered nothing but more dither and delay as ministers set unambitious targets that condemn yet another generation of children to the risk of developing stunted lungs, asthma and a whole host of other health issues.”

“We’ve done the research, we’re taking the world-leading action, we know that here in London we can achieve the Government’s target for PM2.5 a decade earlier than they are proposing by introducing measures proven to be effective. There is no reason for national government not to match the scale of our ambition for the health of Londoners.

“The setting of targets should never be seen as an end in and of itself, but strategic and measurable targets can make a huge difference in working to protect our environment and our city’s residents from the consequences of pollution. That is why I urge ministers to think again about the scope of these targets and commit to doing much more to protect the next generation from the scourge of toxic air.”

Tracy Brabin, Mayor of West Yorkshire and UK100 Co-president, commented: “Within West Yorkshire, we’re doing everything in our power to clean up the air — including investing in electric buses, electric vehicle charging points and helping people to walk and cycle more.

“But one in 20 deaths in our region is linked to poor air quality and that is why it’s crucial that we meet the WHO’s target for PM₂.₅ by 2030.

“As local leaders, we understand the need to work across both political and geographical borders, and we want to work with the Government to ensure our residents can breathe easily and safely.”

Richard Clewer, Leader of Wiltshire Council and UK100 Co-president, said: “It isn’t just our big cities that have air quality problems. There are parts of Wiltshire which are impacted, for example, Westbury where lorries constantly run on the A350 directly outside of people’s front doors.

“Councils have some ability to influence pollution, but we need more support from government legislation to reduce all forms of particulate pollution. Some of our problems are on the A36, a road managed by National Highways, which also means that government assistance is critical to tackling those issues. If we are to properly act as good stewards of the environment we need to look to reduce pollution wherever we can.”

“We’re close to achieving the 2010 World Health Organisation guidelines for fine particulate pollution in outdoor air and doing everything we can to ensure clean, safe air. But we need strong national legislation to support our efforts. So we fully support the call for ministers to go further and faster to clean up air.

“It’s crucial that we meet the World Health Organization’s recommended guidelines for air quality levels by 2030. Not only will this set us on a pathway to clean air across the UK, but it will also deliver significant improvements for public health, the economy, and the climate.”

Kevin Guy, Leader of Bath and North East Somerset Council, said: “I fully support UK100’s request for this government to take a robust position with respect to setting targets on particulate matter pollution. In Bath we have already seen improvements in air quality since introducing a Clean Air Zone.

“Bath’s zone was launched in March last year and is helping to reduce nitrogen dioxide (NO2) pollution. We have yet to receive the formal assessment from the Joint Air Quality Unit, but our data shows that NO2 concentrations in the zone have reduced by 21% since the baseline year, 2019 (pre-Covid). This is despite traffic flows in Bath largely returning to pre-pandemic levels by the middle of the year and significant highway works.

“Air quality and traffic flows have been monitored outside of the zone to determine if the charges have simply displaced traffic and associated emissions, but our findings show that NO2 concentrations in the urban area outside of the zone (but within Bath, Bathampton and Batheaston) have reduced by 22% since 2019.”

Polly Billington, Chief Executive, UK100, added: “Local and regional leaders throughout the country, and across the political divide, are desperate to clean up the air in their towns and cities. But they can’t do it alone. I urge the Environment Secretary to listen to this plea from local authorities and give them the support they need to take decisive action.

“As the National Audit Office’s report makes clear, the Government needs to urgently step-up its action on clean air and bring forward its goal to meet WHO guidelines. At the same time, ministers need to enable local leaders to meet their air quality ambitions by providing the powers and support they need to implement regional air pollution plans that mean residents can breathe easily.

“Action on clean air comes with added benefits. Many of the measures that will help the UK progress on cleaning up our air will also accelerate action on Net Zero, cut health costs, enhance our economy and improve everyone’s quality of life.”

In July, UK100 will join the Mayor of West Yorkshire, Tracy Brabin, to convene a conference of local and regional leaders and mayors from up and down the country to accelerate local clean air and Net Zero progress and turn declarations into delivery.

The Local Net Zero Delivery Summit 2022: From Declaration to Delivery will take place at NEXUS in Leeds on 14th July.