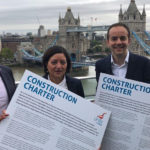 In a major boost to employment standards for construction workers in London, the Mayor of London has signed up to Unite the Union‘s pioneering Construction Charter.

The charter combines the Greater London Authority‘s (GLA) procurement power with Unite’s influence in the workplace to ensure construction projects under the control of the GLA meet the highest employment standards.

The London Borough of Newham also signed up to the Charter. Barking and Dagenham council signed the Construction Charter on 4th July this year.

Construction firms planning to work on GLA building projects will now need to meet the standards laid down in the charter.

The charter commits to working with Unite in order to achieve the highest standards in respect of direct employment status, health & safety, standards of work, apprenticeship training and the implementation of nationally agreed terms and conditions of employment.

“The charter combines the GLA’s procurement power with Unite’s influence in the workplace to ensure construction projects under the control of the authority meet the highest standards.

“Workers will have the right to speak out on safety issues and be paid a fair rate for the job. The charter means there will be no blacklisting of workers.

“Vitally, the charter also protects workers from the scourge of bogus self-employment. It ensures construction workers are directly employed instead of paying £20-30 a week to payroll companies just to get their wages.

James Murray, Deputy Mayor for Housing & Residential Development said: “We are proud to back Unite the Union’s Construction Charter, which leads the way on world-class employment standards for construction workers across London.

“At City Hall we are using all the resources and powers we have to build more council, social rented, and other genuinely affordable homes. The Charter means that workers and residents can be confident that projects we are involved with will follow best practice on conditions and pay for construction workers, and I urge other authorities to join us.”