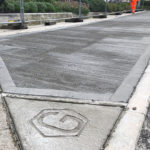 A member of the Government’s Science and Technology Select Committee (STSC) discovered first-hand how material science can help the UK build back better — at a pour of an emissions-busting concrete featuring the nanomaterial graphene at The University of Manchester.

Chris Clarkson, MP for Heywood and Middleton, was on a fact-finding mission to the Graphene Engineering Innovation Centre (GEIC) at the University on Tuesday 5th October.

The MP watched a demonstration of the newly developed graphene-enhanced concrete — called Concretene, developed by the GEIC and industry partners Nationwide Engineering — being poured into specially designed moulds to help create the world’s first set of benches using the breakthrough concrete mix. The unique ‘G’-branded benches will form part of a ‘living lab’ at the GEIC, as well being located in public spaces on the University campus.

“The work done by the GEIC, The University of Manchester and partners like Nationwide Engineering show that British innovation is not just alive and well, but leading the world,” said Chris Clarkson.

“Applications like Concretene promise to be a game changer, reducing costs, emissions and building times in construction. It was a privilege to join the team to learn more and I’m passionate about making sure that Manchester’s graphene revolution is at the heart of levelling up our region.”

Concretene is expected to transform the construction industry – one of the biggest contributors to global CO2 levels — and to help the UK establish leadership in advanced materials for the built environment.

This follows breakthrough research by Manchester engineers who added tiny amounts of graphene to concrete and have demonstrated at commercial scale with industry partners Nationwide Engineering that this allows for removal of up to 30% of material from a build project without impacting on its strength or integrity. This means Concretene is not only much greener but also cheaper to use.

“We were delighted to showcase this technology to Chris Clarkson, especially as Britain is looking demonstrate its commitment to achieving a zero carbon economy on the eve of the UK hosting the COP26 climate change summit,” said James Baker, CEO of Graphene@Manchester.

“The new Manchester-based technology can also contribute to levelling up by positioning our region as a global R&D centre for sustainable materials for the construction industry — attracting investment, creating new businesses and offering high-wage jobs.”

The breakthrough product has been developed both at the GEIC and the University’s Department of Mechanical, Aerospace and Civil Engineering (MACE) in partnership with Nationwide Engineering, an innovation-led construction company co-founded by a Manchester graduate.

Alex McDermott, an Alumnus of MACE and Co-Director of Nationwide Engineering, said: “Our partnership with the University has fast-tracked the development of Concretene, going from lab to product in 18 months. We’re ahead of everyone else in the world with the scale-up of this technology, and we need investment to accelerate the accreditation process so we can roll it out across the building supply chain, stay ahead of the competition and bring real benefits to UK plc.

Alex added: “It’s very important we are based in Manchester — this is the home of graphene and there’s nowhere better in the world to lead this research.”

In early September, the Concretene team laid a concrete slab outside the GEIC as part of ongoing research to monitor performance of the new concrete in real-world conditions and to help certify the product in readiness to scale further and deploy in major build projects in the UK and beyond. Additional commercial pours are scheduled for the autumn in Manchester and further afield as the product gains momentum in the industry.