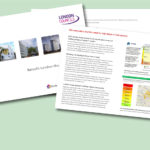 A new plan to achieve net zero across all London properties could see a £98bn investment in the green economy and result in massive environmental and economic benefits, boroughs have declared.

All 33 of the capital’s local authorities have agreed a joint plan to cut carbon emissions from London’s 3,781,477 domestic buildings by retrofitting to improve energy efficiency [1].

Homes are responsible for around one third of London’s greenhouse gas emissions. By committing to upgrade all housing stock to an average energy performance rating of EPC B by 2030, boroughs will drive a dramatic decarbonisation of London property and make vital progress on the capital’s path towards net zero [2].

With the Government’s Spending Review and the COP26 climate change summit fast approaching, boroughs are urging minsters to increase local government’s resources for this work.

Research underpinning the boroughs’ plan states that if London continues to emit carbon dioxide at current levels its entire carbon budget will be used by 2027 (based on London’s share of the UK carbon budget). Achieving the reductions needed to align with the carbon budgets set by the Paris Agreement will require a rapid switch away from gas for heating, the majority of which has to be completed this decade.

Highlighting the plan as an unprecedented level of collaboration among UK local authorities on this key national priority, the cross-party group London Councils says that boroughs’ ambitions for retrofitting the capital rely on targeted government investment, facilitating new private financing opportunities, and encouraging funding by landlords and individual households.

London Councils estimates that achieving net zero in every London property will cost £98bn overall, but that this target will support 200,000 jobs linked to insulating and retrofitting by 2030 [3], boosting London’s post-pandemic economic recovery and encouraging growth in green industries. Additional benefits include a reduction in fuel poverty, which currently affects 14% of London households [4].

London Councils is calling on the government to use its Spending Review to announce:

“This is a vital investment in a greener future for London and the whole UK. Retrofitting on this scale will bring immediate benefits by creating new jobs while also at this crucial time lowering Londoners’ fuel bills, cutting carbon emissions, and addressing the climate emergency.

“As we approach the Spending Review and COP26, the Government should seize the day and boost local funding for this important work, which is integral to the UK’s ability to make net zero happen.”

Joanne Drew, Co-Chair of the London Housing Directors’ Group, commented: “Boroughs are fully committed to the home retrofit agenda and are proud to pioneer a new collaborative approach. Our plan identifies the steps needed to turn ambition into reality, setting out the costs involved and measures we will take to work with residents and landlords.”

The Retrofit London Housing Action Plan — which was developed by the London Housing Directors’ Group with support from the London Environment Directors’ Network, the GLA, and Enfield and Waltham Forest as lead boroughs for this project, and other partners – sets out several key principles, including:

The UK’s retrofit market is highly unstable. The National Audit Office (NAO) recently criticised delivery standards in the government’s £1.5bn Green Homes Grant scheme as “rushed” and noted the scheme’s design failed to “sufficiently understand the challenges” [5]. Launched in September 2020 and scrapped in March 2021, the scheme was set up to help homeowners retrofit and insulate their homes.

London Councils wants the Government to focus on longer-term investment in retrofitting and to work with local authorities on a joined-up, cross-tenure approach. Councils are already a major customer in building renovation and maintenance and so can support local trades and consumers by providing consistent demand and clear requirements.

Boroughs’ resources will meet only a relatively small proportion of the overall funding requirement and investment in London local authorities’ own stock is likely to need both grant subsidy from central government and private finance investment.

In its submission to the government’s Spending Review — which the Chancellor will unveil on 27th October — London Councils listed the green recovery as a top priority for the coming years, while also pointing to the funding constraints that risk hampering progress. London boroughs have seen a 25% reduction in overall funding since 2010.

Rob Whitehead, Director of Strategic Projects, Centre for London said: “Emissions from heating our homes are a major cause of the climate crisis. London’s local authorities know this, which is why they have ambitious plans to retrofit homes, reducing both carbon emissions and energy bills — for renters and homeowners.

“Now the Government must step up and give councils the funding and powers they need to put these plans into action. The Government should also ensure that any scheme to decarbonise heating works well for London’s unique mix of housing stock, tenure and incomes.”

[1] Retrofitting of existing buildings is an opportunity to upgrade their energy performance through increasing efficiency or decreasing demand. Legally binding climate change targets mean that by 2050 energy use in UK homes is expected to be responsible for net zero carbon emissions. Examples of retrofitting modifications include external and/or internal insulation on walls or in lofts, air-tight window frames, and the use of more efficient heating and other energy appliances.
[2] London Councils commissioned data modelling from environmental analysts Parity Projects to provide an evidence base for the action plan. This research shows that the only 2.5% of London homes are currently at EPC A or B, with the rest in lower energy performance bands. 95% are at EPC C, D, or E.
[3] Parity Projects estimated the total cost of labour and materials for retrofitting all domestic buildings in London to achieve net zero carbon emissions as £97.957bn, with the average cost per residential property calculated to be £25,900.
[4] Source: https://www.gov.uk/government/collections/fuel-poverty-statistics#2019-statistics
[5] Source: https://www.nao.org.uk/report/green-homes-grant/
[6] The Retrofit London Housing Action Plan was produced on behalf of the London boroughs by a team of consultants including Etude, RAFT, Elementa, Julie Godefroy, and John Palmer.
Development of the action plan was taken forward by the London Housing Directors’ Group and London Councils, with support from the Greater London Authority and the London Environment Directors’ Network (LEDNet).
[7] A public launch of the report will take place on Tuesday 26th October, 9.30-11.00. Further details of the online event and registration can be found here.