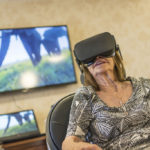 Local housing provider, Grand Union Housing Group, is using virtual reality (VR) to transport residents living in a specialist dementia care scheme in Bletchley to another world, all from the safety of their armchair.

The residents at Flowers House, which is run in partnership with Milton Keynes Council, look forward to their six-weekly sessions with Escape2VR, when they can put on the headset and visit places they want to go to, or where they’ve been before.

Jan Davis, Grand Union’s Dementia Project Officer, said: “Residents put on the goggles and when they move round in the chair, the world moves with them. Residents can swim under the ocean, go on safari, take a trip on a roller coaster or even go skydiving.

“The images for those with the headset is in 3D whilst everyone else can see the images on a large screen so no one is left out. The VR works with customers’ emotional memory and stimulates long-term memory.

“We want to show that it’s not all doom and gloom for those who are living with dementia; they can still feel joy and get involved in the outside world through the virtual world.

“Resident Pat used to live in Kenya, but with little chance now of returning there in the real world, she is able to experience it in the virtual world. It’s wonderful to see!”

Phil Hardy, Executive Director of Operations, added: “Grand Union doesn’t just put roofs over people’s heads, we provide extra services for those that need them, helping people to change their lives for the better.

“For those living with dementia, long-term memory is often the last to go. Using technology to reminisce about old times and places, or to stimulate conversation, can make such a positive difference to those living with this condition.”