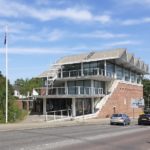 Hampshire’s Record Office in Winchester is one of six landmark sites across the UK that have been awarded listed status by the Department of Digital, Culture, Media and Sport on the advice of Historic England to commemorate Her Majesty The Queen’s 70-year reign. The award-winning building, designed by the County Council, was opened by Queen Elizabeth II in 1993.

Leader of Hampshire County Council, Councillor Rob Humby, said: “It is a great honour that Hampshire Record Office is one of just six extraordinary sites across the country that have been listed in honour of their connection to Her Majesty The Queen, and in recognition of their architectural merits. This is a special accolade to the people who were involved in this project and those who continue to work and use the building today. Anyone can visit this treasure trove that holds centuries of Hampshire’s fascinating history for people to enjoy now and in the future.”

Councillor Steve Forster, Executive Member for Commercial Strategy, Estates and Property added: “The Record Office was designed by the County Council’s in-house architect’s team, led in those days by the eminent County Architect Sir Colin Stansfield Smith, to include pioneering techniques that supported the preservation of fragile documents, whilst offering a welcoming and practical space for visitors. We are very proud of Hampshire County Council’s continuing distinguished track record of designing exceptional public buildings that support the delivery of high-calibre local services, whilst creating quality places for our communities to enjoy.”

Hampshire Record Office was formally opened by Her Majesty The Queen on 19 November 1993, during which she unveiled a wall plaque on display in the main entrance. Sir Colin Stansfield Smith worked in close collaboration with Rosemary Dunhill who was the County Archivist at that time.

The County Council’s in-house property team continues to thrive today and has built on its national reputation for the quality of its public architecture and infrastructure work, particularly in relation to school design. The team has won multiple awards over the past thirty years, including most recently for The Lookout, a stunning new visitor centre at Lepe Country Park, and for Barton Farm Primary School in Winchester which has been credited for its environmental and architectural qualities.

Hampshire Record Office is the home of 1,000 years of history and comprises Hampshire Archives and Local Studies and Wessex Film and Sound Archive. It is a service that is open to anyone – whether undertaking research into their family genealogy or pursuing academic work. The archives are a unique collection of stories from the past, ranging from letters by Florence Nightingale and Jane Austen, to war diary entries from the Western Front recording the 1914 Christmas Truce, to the Winchester Pipe Rolls – a series of medieval account rolls recording the minutiae of farming life on dozens of Hampshire manors from 1208 onwards (the most complete set of manorial accounts in the country). The collections are carefully housed in the purpose-built accommodation which includes eight miles of shelving. You can find out more including opening hours, events, and collections by visiting: www.hants.gov.uk/archives