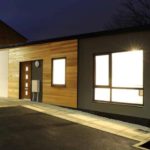 Work has started on four new bungalows converted from under-used garage blocks on two sites in Peterlee. The project is a pilot scheme by County-Durham based believe housing. The housing association is currently creating more than 110 new affordable homes in Peterlee alone.

The new homes will use the floors and the main walls from the existing garages. Construction will see a purpose-built structure completed offsite and lowered into the space created, to make modern, energy-efficient bungalows. Each bungalow uses the space previously taken by five garages.

The Patented method was developed by experts in repurposing existing buildings, Husk. It is designed to be a quick and efficient way of creating extra bungalows in an area of Peterlee with high demand for single story homes. When complete, all of the walls will be rendered, making it almost impossible to identify their former use.

All of the new bungalows will be available for affordable rent when complete. They have been designed to allow easy conversion for future customers with specific access requirements, such as wheelchair users.

Construction is due to take under six months, with the first tenants expected to move into the new bungalows during June.

Dan Mawson, Development Surveyor from believe housing said: “These garages were too small for modern cars and most of them were sitting unused. But demand for affordable bungalows has probably never been higher. This should be the perfect solution to both problems.

“The construction process should be pretty quick, and the end result promises to be a big improvement for the area, as well as some great homes.”

The new bungalows in Peterlee are part of believe housing’s multi-award winning new-build programme. Homes have already completed in locations including Bishop Auckland, Crook, Pity Me and Seaham.

Russell Edwards from Husk said: “We are delighted to be working with believe housing to provide residents with much needed bungalows within their existing neighbourhoods, through the use of our patented method of converting previously undevelopable brownfield sites.”

Header image shows an impression of how the finished bungalows will look.

0 0 0 0
Previous : 43 new homes in Kirkby Liverpool for Plus Dane
Next : Baxi Heating | Question Time: The Future of Heat