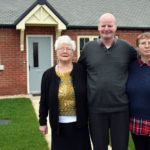 Leading affordable housing provider Housing Plus Group has marked Rural Housing Week (6th-10th July) by showing how a new home in a Shropshire village has improved the lives of a local couple.

Tracey Lopez and Richard Evans have become the first tenants of a newly-built bungalow in a small rural development in Cross Houses. The couple had previously rented privately but were looking for long-term security and needed a home with better accessibility after Richard became ill.

“Richard used to be so fit and active before his illness,” explained Tracey. “Then everything changed. He was finding it really difficult to get around our previous home.”

Tracey wanted to stay local, close to her mother, so the couple were thrilled to have the opportunity to move into a new bungalow in the same village.

“It’s made a huge difference,” said Tracey. “My mum’s a housing association tenant and I grew up in the house where she still lives. I know that she used to worry that we didn’t have the same kind of security and could lose our home.”

Richard is finding life a lot easier: “Everything is on one level, so I can be a bit more independent. It feels as though we are getting life back on track.”

Housing Plus Group, which includes South Staffordshire Housing Association, Severnside Housing and Stafford and Rural Homes, has invested £20m in rural housing schemes over five years and confirmed plans to build up to 220 homes on residential development land in the south Staffordshire village of Perton. Its low-impact development in the village of Swindon, near Wombourne, was chosen for a fact-finding visit by Housing Secretary Robert Jenrick, when he considered the benefits of shared ownership housing in rural communities.

“Our research shows that every £1 that we spend on new rural housing, produces vital social benefits worth more than £8 through increased spending in local shops and businesses as well as support for community resources like village schools,” said Housing Plus Group Chief Executive Sarah Boden. “Even more importantly, rural housing helps people like Tracey and Richard who can find it almost impossible to find an affordable home in their own village.

“In Rural Housing Week it is essential that we understand the importance of projects which improve the lives of local people and help to ensure the survival of village communities.”

Header image shows Richard Evans and Tracey Lopez pictured with Tracey’s mother Jillian, shortly after Richard and Tracey moved into their new bungalow in the village where Tracey grew up.