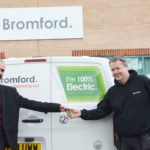 A Midlands housing association is driving forward with its plans to reduce its carbon footprint with the arrival of its first electric vans.

Bromford’s first 15 electric Vauxhall Vivaro-e vans have taken to the roads to replace some of its traditional internal combustion engine diesel vehicles. The first phase of the electrification of Bromford’s fleet will see the arrival of 32 vans being used by its service delivery engineers over the weeks ahead. The Wolverhampton-based housing association aims to complete a second rollout of up to a further 50 additional vans before the end of the year. Bromford’s fleet of 430 vans clock up 6.5 million miles every year as its staff carry out repairs and improvements to its 44,000 homes across the central and south west of England.

Neville Meakin, Associate Director – Commercial and Logistics, said: “We’re delighted to see the first of our new electric vans arrive, as this is a significant step towards reducing our carbon emissions. The benefits of electric vehicles are obviously clear; they’re cleaner, they’re safer and they’re quieter. But the biggest advantage is to the environment and this is absolutely the reason why we are doing this.

“We’ve taken a prudent approach to moving to an electric fleet and are doing it in phases, with an aspiration to have 90% of our fleet electric within the next five years. For now, customers will see our first 15 electric vans out on the road from this week.”

Alongside the arrival of the new electric vans Bromford has installed charge points at employees’ homes and is planning to install further points at its offices in the future. Drivers will also be able to find their nearest charge point through an app on their mobile devices.

“The vans are very fast charging and go from 0 – 75% in about 45 minutes,” Neville added. “They can do about 180 miles on a full charge and they can get extra boost using the regenerative braking system. And with fewer moving parts, there’s less that can go wrong, which should reduce the cost of repairs and maintenance needed on the vans as well as reducing their time spent off the road, making our engineers more efficient.”

The rollout of the electric vans is part of Bromford’s overall strategy to reduce its carbon footprint which has also seen the housing association reduce its office footprint over the past year and introduce new ways of working which will reduce the number of journeys colleagues make.

0 0 0 0
Previous : Kingston Council is calling for local design ideas to revitalise the riverside as part of plans to breathe new life into the town centre
Next : New gas services deal struck for Muir residents with high-performing Liberty