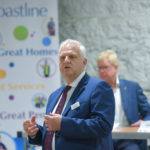 Local landlord Coastline Housing has unveiled an ambitious new four-year plan committing to building up to 1,200 new affordable homes and working with others to help solve the county’s housing crisis.

The housing charity’s new plan was unveiled at an event where local community partners came together to hear about Coastline’s goals for the next four years and take part in a question and answer session with an expert panel about the housing crisis and its wider impacts.

Coastline, which currently owns and manages nearly 5,000 homes across the county has committed to growing its stock by over 20% in total over the next four years to help manage the ongoing housing crisis.

It will be offering housing in a variety of tenures and sizes, recognising the needs and wants of people at various stages of their life in the county at different times. Coastline currently stands as the eighth fastest growing developer of new affordable homes nationally. Last year in Cornwall, Coastline invested £34.5m including almost £3m of grant, from local and central government in the development of new properties.

The charity has also committed to playing a leading role in Cornwall’s climate change action plan, working towards being carbon neutral by 2030 and creating homes and communities that work to complement their natural environment.

Allister Young, Chief Executive, said: “The housing crisis impacts in many profound and unfair ways, perhaps most significantly by trapping people in poverty. Building more social homes, and investing in the quality of the ones we currently have, can help people escape the constraints of poverty, reduce and prevent hardship, and can help improve health and wellbeing.

“Our ambition is to end the housing crisis in Cornwall. We recognise that this is not something we will be able to do alone, but we are determined to work collaboratively with partners and investors to make a big impact.”