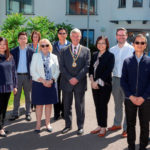 Local housing provider Grand Union Housing Group was pleased to host a visit to Milton Keynes recently by a delegation of housing professionals from Hong Kong who were visiting the UK on a fact-finding trip to learn more about housing in this country.

The four housing managers and two surveyors from the Hong Kong Housing Department met the Mayor of Milton Keynes at Flowers House, Grand Union’s specialist dementia scheme in Bletchley, and were given a tour of the scheme which is managed by Grand Union in partnership with Milton Keynes Council. The scheme is situated next to the historic Bletchley Park and is home to 34 people, offering secure round the clock care.

Aileen Evans, Grand Union’s Chief Executive, said: “We were honoured to have the delegation visit us and to be able to show them round Flowers House. We’re very proud of this unique scheme and how our care and support can make a difference to people’s lives.”

Cllr Crooks said: “Flowers House is a wonderful example of partnership working and it was such a delight to welcome the delegation from Hong Kong to Milton Keynes and share with them how, together, Grand Union and Milton Keynes Council are helping people living with dementia retain their independence.”

Earlier in the day, the delegates met Simon Green, the CEO of the Milton Keynes YMCA, who gave the group a hardhat tour of the new 199-roomed YMCA campus that is under construction and is set to be completed later this year.

After the visit surveyor Anthony Hui Choi-wah said: “It was amazing to see the very people-focussed nature of the care at the two projects. This quite a difference from the way we manage housing in Hong Kong and some of the non-housing support and IT were very interesting. We all learned something new from our visits.”

The picture shows Cllr Sam Crooks, Mayor of Milton Keynes, with the delegation from Hong Kong, together with staff from Grand Union Housing Group and Milton Keynes Council at Flowers House in Bletchley.