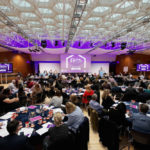 More than 130 leaders and practitioners from housing associations, local authorities and voluntary organisations came together at the second annual Homes for Cathy conference on 25th March to share real examples of the work being done to end the growing UK homelessness crisis.

First established in 2016 to mark the 50th anniversary of Ken Loach’s landmark drama documentary Cathy Come Home, Homes for Cathy is a nationwide alliance of 76 housing association dedicated to raising awareness of homelessness and helping to meet the continuing needs of homeless people.

Kicking off the conference, Chief Executive of the Chartered Institute of Housing, Terrie Alafat, called for the housing sector to take ownership of the housing crisis and become leaders in their local areas in tackling the causes of homelessness.

Crisis’ Chief Executive, Jon Sparkes, shared the shocking statistic that 170,000 families and individuals across Britain are currently experiencing homelessness. He stressed that social housing is the last line of defence against homelessness and challenged housing associations to look at their eviction and lettings policies to ensure they are doing as much as they can to avoid making tenants homeless.

Delegates also heard from former UN Human Rights Rapporteur on Housing, Raquel Rolnik, Professor of Architecture and Urbanism at the University of São Paulo, who gave a global perspective on the issues surrounding homelessness, stating that housing is more than a place to live and needs to be framed as ‘a human right, not a financial asset’.

Daisy May-Hudson, Director of the documentary ‘Halfway’, showed a scene from the film and spoke about her own family’s experiences of life in a homeless hostel after their landlord sold their home and served them an eviction notice. The Director, named as one of Bafta’s breakthrough Brits, explained her feeling of shock and realisation that becoming homeless can happen to anyone.

A moving scene from ‘Street Life’, a play by Verbatim Theatre Performance, told the story of women who have experienced domestic abuse and become homeless. Street Life was written following interviews with people sleeping rough in Norwich and is told in their own words. Some of the cast had previously been homeless and spoke after the performance about the realities of living on the street or sofa surfing.

David Bogle, Chief Executive of Hightown Housing Association and chair of the Homes for Cathy conference, said: “Housing Associations have the ability, the skills and the resources to do more to end homelessness — I believe it is our greatest challenge as a sector and will define us and our reputations over the years ahead.”

Homes for Cathy works alongside campaigning organisations and charities including the National Housing Federation, Crisis and Shelter in lobbying government for additional resources to help tackle homelessness and supports local authorities in their statutory homeless responsibilities. The Homes for Cathy group has undertaken a range of activities locally and nationally to raise awareness of the plight of the homeless, including sponsoring parliamentary events, local debates and theatre/drama workshops (working with the Cardboard Citizens) and producing an Education pack for schools.

0 0 0 0
Previous : CIH calls for government to suspend Right to Buy as RTB replacements continue to fall
Next : Affordable Homes Guarantee Scheme: a joined-up approach is vital for success