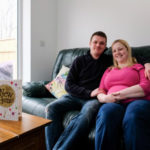 Onward Homes’ new affordable housing scheme in the North-west is helping first-time buyers get on the property ladder with Shared Ownership.

Leading housing provider Onward launched the new 10-home High Park Grange scheme in Southport in November, and delighted residents have begun moving in. The £1.8m development, which is a mix of two detached, four three-storey and four semi-detached homes, is designed to boost affordable home ownership in Sefton. Interest has been high, with over half of the homes already sold.

Onward worked with developer Kingsmead Homes on the Shared Ownership scheme, with work beginning in November 2017. The project received funding from Homes England and the Recycled Capital Grant Fund (RCGF).

Homes England specialist Sarah Hebron-Doran praised the development during a recent visit. “I think the scheme is going to have a positive impact on the local community,” Sarah said. “There are some affordability issues in the area, and Shared Ownership means we can open it up to different people.”

Sarah was particularly impressed with the high quality of the homes, and the warm and positive atmosphere created within the properties.

“The scheme looks really high quality,” Sarah continued. “The finish is really good and I’m particularly pleased with how light and airy they are. There’s also really good access to green space. To imagine children playing in the garden in summer is really exciting.”

Sarah went on to highlight the importance of affordable housing, stressing that the issue affects ‘all types of people trying to access all types of homes’.

“It’s good to see three different types of houses on such a small scheme, bringing such choice for people,” Sarah added. “Onward is a partner who’s always delivered on Homes England’s investment and hopefully will continue to do so.”

One of the first residents to arrive at High Park Grange was the Lightfoot family, who moved in January. After years of renting privately, and following several mortgage setbacks, Gemma and Danny Lightfoot were beginning to think that they would never be able to own a place of their own. But, with the help of Shared Ownership, they have now bought their dream family home for them and their two young boys — six-year-old Jay-Jay and two-year-old Matthew.

Dental nurse Gemma, 30, explained: “We’d been trying to get a mortgage for a while and had been turned down many times. We kept an eye on the market, as you do, and this development popped up on Rightmove. We took a shot and here we are.”

Danny, 33, a music teacher, added: “We came to view the show home in November. As soon as we walked in I was thinking ‘there’s no chance. If we could get this it would be a dream come true.’ With our situation and the amount of times we tried, I thought it was a pipe dream.

However, after going through the details with Onward, Gemma and Danny found that they could make their dream a reality. With a little help from their parents, they were able to put down a £6,825 deposit to purchase a 25% share of their three-bedroom home.

Pictured above are new residents Gemma and Danny in their first home.