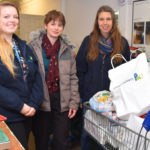 The Hemel Hempstead based foodbank — run by the DENS charity in partnership with the Trussell Trust — plans to use the donation towards the 60-70 emergency parcels it distributes each week to both single people and families in the area.

Hightown works closely with the foodbank, supporting tenants to access its service during times of crisis.

Chloe Baxter, Tenancy Sustainment Officer at Hightown, who helped organise the donation, said: “We are in regular contact with our most vulnerable residents and help to direct them to services such as DENS when they are facing financial hardship. Often residents aren’t aware of what support is available out there. The foodbank provides a lifeline for many local people, so the staff at Hightown were keen to do their bit to help.”

The DENS foodbank saw a 16% increase in people accessing its service in the last financial year, including homeless people, families unable to feed their children during the summer holidays and those affected by job loss or changes to benefit payments.

Food and other donations are sorted by a dedicated team of volunteers, with a proportion of items going to the DENS day centre for its hot meal drop-in service and to The Elms night shelter. The charity also makes up around 60 special hampers, which it distributes on Christmas Eve to vulnerable members of the community nominated by other local charities and organisations.

Header image shows Chloe and Natalie from Hightown and Michelle from DENs foodbank.