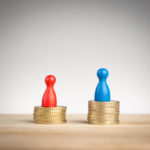 The 20th RICS and Macdonald & Company Rewards and Attitudes Survey has found that the gender pay gap has closed in the construction sector during the past year, as more women are attracted to the industry. The gender pay gap figures are being released for International Women’s Day, with the main data to follow next week.

The overall gender pay gap between median salaries across property and the built environment is now 18.6%, according to the 3,461 UK respondents. However, this figure hides very marked contrasts and in many areas the gender pay gap is below the national average. Positively, in construction, the gender pay gap has narrowed to 20.43% (from 36% last year) as industry takes action to recruit a wider and more diverse workforce. Last year’s gender pay gap figures (April 2018) showed that the construction industry was one of the poorest for pay disparity.

RICS has been a leading voice in the drive to close the gender pay gap in industry, and positive action can also be seen in younger age groups where the gap is also narrowing. For example, in London, female respondents to the survey working in construction in London are paid an average base salary of £43,000, whereas their male counterparts are paid less at £37,500. As the age of respondents increases, the disparity reverses in favour of men. However, men still gain more in bonus payments across the board, and a large disparity is visible in younger age groups.

Looking at changes to working practices, to allow for a more balanced and diverse work force, the survey asked respondents to note other benefits for which they are eligible. The results indicate that the industry is becoming more accommodative to work/life balance needs. Such benefits include working from home (46% of respondents are eligible to receive); flexible hours (35%); family healthcare (22%); Employer pension (74%); Critical illness/life cover (37%).

Demonstrating progress
Barry Cullen, RICS Diversity and Inclusion Director, adds: “The latest Rewards and Attitudes Survey certainly demonstrates that progress is being made, but there is still a long way to go, and we’re disappointed in the difference between male and female bonus figures across the board. RICS has promoted and pursued over the last five years, continued, consistent action from industry to engage and attract a wider more diverse pool of talent.

“We have been working to ensure that there is greater awareness of surveying as an aspirational career path, and that there is an improvement in the number of women coming into surveying. Already this year we are seeing 25% of all newly qualified professionals and almost a third of new enrolments are women.

“Whilst this is positive, there is still a need to reflect on the departure of women mid-career, the encouraging signs would seem to be that workplace culture is changing to meet the needs of a modern workforce, requiring greater flexibility. This should be further supported by firms of all sizes to ensure that women are retained and are able to progress, only by more women accessing senior leadership roles will the gender pay gap be reduced even further.”

Closing the gap
Speaking of these survey results, Peter Moore, CEO of Macdonald & Company, said: “Closing the gender pay gap is not an issue that can be solved overnight. However, headway is being made across most sectors of our industry. As more women are encouraged into the real estate and the built environment realm, I expect the pay gap to close further throughout their careers.

“The work that many employers have been doing to close the gender pay gap, along with the enthusiasm of RICS in promoting a more open and diverse environment, is paying dividends. Policies such as flexible working and working from home are key strategies to encourage women into the sector, as is better training and education. This is a battle not only for the industry, but also for government to fight.

“Other strategies helping to close the divide include positive discrimination at the hiring stage, tracking gender balance, partnering with educators, and greater support for women who return from maternity leave. As the UK’s premier recruitment specialist in the real estate and built environment, we applaud all such initiatives.”