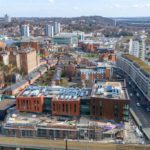 Five years after Grenfell, work continues to make sure residents in tall buildings are safe

Five years on from the Grenfell disaster, Nottingham City Council is continuing to take action to support residents living in tall and multi-occupied buildings in the city.

The council is working with partners including Nottinghamshire Fire and Rescue Services to support those living in apartment blocks and especially taller buildings (18 metres or over) by taking action to help keep them safe. It comes as Nottingham, London and the whole country remembers the Grenfell Tower fire which killed 72 people exactly five years ago.

This week the council is marking the five-year anniversary since the devastating fire by joining other landmarks around the country to turn the Council House green in memory of the 72 people who died at Grenfell Tower.

Working alongside partners, the council has been supporting residents to make sure their homes in apartment blocks are safe, that the cladding is safe and that fire safety measures are up to scratch. The council’s actions include:

Fire safety in council owned residential buildings
Cladding on high-rise blocks owned by Nottingham City Council and managed by Nottingham City Homes (NCH) already meets the required safety standards, and did not have the same cladding as that used on Grenfell Tower. However, additional fire safety works have been carried out in low-rise and high-rise blocks to help reassure and keep tenants safe. They include:

Nottingham City Homes also carries out annual comprehensive reviews of fire safety in conjunction with Notts Fire and Rescue Service, and in consultation with residents. They have also been preparing in advance of new legislation, the Building Safety Act, to ensure council housing will meet all new requirements to keep tenants safe in the future, this includes a major programme of investment in Carbon Monoxide detectors which has just been approved by the Council.

Councillor Toby Neal, Portfolio Holder for Housing and Human Resources at Nottingham City Council, said: “Five years on from Grenfell, we remember those who lost their lives and continue to do all we can locally to ensure that lessons are learnt and such a terrible disaster can never be repeated.

“In Nottingham, we have been working for a number of years to ensure the safety of residents living in blocks of flats and we know that fire does not discriminate by height. That is why our JAIT team investigate flats not just over 18 metres but under this height. We also worked to find out which buildings were a potential risk in this city and worked with building owners and developers to make sure that plans were in place and work was done to replace suspected unsafe cladding.

“We have also made sure that our own residents in council owned blocks feel safer. Our cladding was already up to standard and we had good fire safety measures in place, but we invested £8.5m to enhance these works and put in additional measures for council tenants to feel even safer.”

Nick Murphy, Chief Executive at Nottingham City Homes commented: “Our programme of fire safety improvements to council flats has offered further reassurance to people living in our high-rise blocks and residents tell us they appreciate the work and do feel safer. This huge programme, carried out with Nottingham City Council, saw hundreds of sprinkler systems installed in over 1,500 properties. All council owned high-rise blocks have fire risk assessments in place and were already compliant with current regulations, these additional fire safety works have been carried out to provide further assurance.

“We have also been preparing in advance of the new Building Safety Act, working with tenants so that we are ready to implement future requirements. Fire safety is everyone’s responsibility, and it’s important that tenants keep appointments for our gas, electrical and other routine checks we carry out.”

David Stevenson, Group Manager for Protection at Nottinghamshire Fire and Rescue Service added: “Grenfell is still very much in our minds and our thoughts continue to be with those that were lost or affected by the tragedy. Our Protection Team, who work to improve safety in all buildings, work closely with Nottingham City Council on the JAIT programme to ensure people who live or work in high-rise buildings in the city are as safe as possible.

“As part of a national review of all buildings, our Response colleagues helped to inspect 125 buildings across the city and appropriate measures have been put in place to improve fire safety. This was achieved three months ahead of schedule. To support this work we have also invested in the training of our firefighters, equipment specifically for fighting fires in tall buildings and reviewed all that we do to ensure we protect and serve our communities effectively.”

0 0 0 0
Previous : Targeting Legionnaires Disease: Using digital thermometers to keep people safe
Next : ‘No rest until every Londoner is safe in their home’