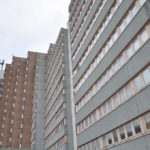 Work to install sprinklers and update safety measures is continuing on council high-rise blocks in the city of Nottingham.

Nottingham City Council owns 13 high-rise blocks, which are managed on its behalf by Nottingham City Homes. The organisations have been installing sprinkler systems in communal areas and improving intercom systems and residents have been reassured that none of the blocks are clad in the same material as used on the Grenfell Tower.

However, the council has still not received the promised financial support from Government, despite repeated requests. Extra money was promised for post-Grenfell safety measures but has not materialised. On several occasions since the tragedy, the council has asked the Government for the £8.4m costs incurred only to be turned down. Instead the council has had to borrow the money, so that current improvement programmes and house buildings projects are not affected.

Councillor Linda Woodings, Portfolio Holder for Housing, Planning and Heritage at Nottingham City Council, said: “Since the terrible tragedy at Grenfell two years ago, we have undertaken a huge amount of work with our local partners.

“All of our council high-rise blocks have fire risk assessments in place and are fully compliant with current regulations. We have installed sprinkler systems, and upgraded the fire alarms, intercoms and communication equipment at a cost of £8.4m, which, despite promises, the Government has never provided any funding towards.”

The council has already been carrying out the work — but is still pursuing the Government to cover the costs as it promised to shortly after the Grenfell fire.

The council is also working with partners to look at building and safety standards in private high-rise blocks in the city. As part of work being done by the Safer Housing and licensing teams at Nottingham City Council, letters will now be going out to ensure that these blocks are licensed properly and there are robust safety measures in place.

Councillor Woodings added: “We are issuing a joint letter with Nottinghamshire Fire and Rescue later this week which will set out plans to begin further inspections of privately-owned residential properties. This programme will take place over a period of two years and will highlight any issues around fire safety so that, where appropriate, action plans can be drawn up.”