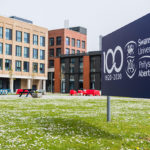 Swansea University has installed Vimpex Fire-Cryer Voice Enhanced Sounders on link bridges between university buildings, to increase the protection of staff and students should there be a fire alarm, by delivering clear messaging and ensure a fast, efficient evacuation.

Swansea University has eight colleges spread across its two campuses, which are located on the coastline of Swansea Bay. It currently has 20,375 undergraduate and postgraduate students who come from over 130 different countries.

Following a fire risk assessment carried out by the University that identified the sound of the fire alarm not reaching all parts of the campus, it was decided to install voice enhanced sounders on link bridges between University buildings to ensure staff and students would evacuate as quickly and effectively as possible, should there be a fire emergency.

Vimpex Fire-Cryer Voice Sounders were specified because they offer a simple, fully synchronised and cost-effective voice evacuation solution. Whether retrofitted into an existing installation or as part of a new system design, they can be fully integrated into the fire alarm system and work on a conventional two-wire bell circuit. They can be fully synchronized and have a low current consumption allowing simple replacement of existing sounders and bells.

Fire-Cryer Voice Sounders can be programmed to produce bespoke messages and tones specifically designed for each location, and is the only voice sounder system available with a range of discrete ceiling mounted voice sounders through to high output IP66 voice sounders.

The Fire-Cryer Voice Sounders were installed by Swansea based Plexus Fire & Security.