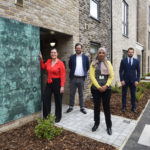 The first public art, as part of the ‘Resonance-Cambridge’ project, an extensive programme of commissioning by Cambridge Investment Partnership (CIP) across its developments, has been unveiled at Anstey Way in Trumpington, Cambridge.

Colchester based artist, Sarah Sabin, applied to be one of the artists to deliver public art at CIP’s developments in the city. Renowned for creating art ‘which digs about under the surface of places,’ Sarah was really interested in the local history of the Trumpington area and worked closely with local community groups to influence the design and character of the artwork. 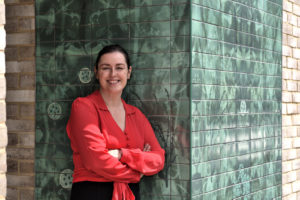 Sarah (pictured) explained: “I was keen to delve into the history of the area, in particular the history of farming and the Plant Breeding Institute so was delighted to be able to work closely with Trumpington Local History Group to learn more. Trumpington conveys a sense that it’s a nurturing place to live with existing residents welcoming newcomers into the community and I was keen to convey the idea of how a community grows and what underpins the communities that continue to flourish.”

Working with two classes from Fawcett Primary School and various groups including the Trumpington Local History Group and Residents Association, Sarah hosted a series of workshops using different mediums, including the creation of cyanotypes (or sun prints) of local plant life which would form the base of the artwork design. The children investigated the themes of growing and community through talking, exploring and making in various ways and created handmade paper from shredding recycling paper on which they wrote words about their village.

Sarah continued: “Using digitally manipulated imagery and layered cyanotypes I wanted each entrance at Anstey Way to have an individual identity which related to different aspects of Trumpington and could be overlaid onto the base design and transferred onto the tiles around the entrance. I am thrilled with what has been produced and it’s wonderful to see it finally in situ.”

Cllr Richard Johnson, Executive Councillor for Housing for Cambridge City Council and CIP board member commented: “Cambridge is rich in public art and we are committed to continued support for arts and culture, which boosts the local economy by creating jobs, attracting visitors, revitalising places, creating community cohesion and has a positive impact on health and wellbeing.

“It is wonderful to see the fantastic public art installed in our first development at Anstey Way and see all the ideas incorporated from local community groups and school children incorporated in it.””

As part of the public art project, sculptors Rodney Harris and Valda Jackson also created artwork within a section of the bricks. Through inspiration from the connection of Maris Piper potatoes that was developed at the former Plant Breeding Institute in Trumpington, Cambridge, a sack of potatoes has been carved into the brickwork to commemorate what is possibly one of the most widely known variety of potato.

Anstey Way is the first completed development for Cambridge Investment Partnership, which was established three years ago in a bid to tackle the affordable housing shortage across Cambridge. It has replaced 26 aging council homes that were previously on the site with 56 one, two and three bedroom council rented apartments for local residents.

Cambridge Investment Partnership is one of the first partnerships to be formed to deliver new council homes and it is already working on 11 sites across the city with 480 council rented homes granted planning.