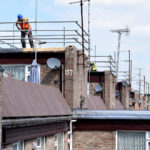 EQUANS, part of the ENGIE Group, has delivered significant improvement works across 215 homes on behalf of Rotherham Council, which has led to a 30% reduction in resident fuel bills and cut carbon emissions in the region.

A £4.2m investment, including £1m from the Government’s Green Home Scheme, allowed the council to partner with EQUANS and retrofit homes at The Lanes, East Dene — which was completed in just six months. The scope of works included fitting new triple glazing, replacing old boilers, insulating external doors as well as re-sealing and insulating all flat roofs. Pitched roof and cavity wall insulation was topped up where necessary.

It is estimated that these improvements will, on average per household, cut fuel bills by £323 per year (a saving of more than 30%) and eliminate approximately 1.5 tonnes of C02 emissions annually.

Properties at The Lanes have become progressively more difficult and expensive to heat since they were built in the 1950s and 60s. They were built without roof insulation, making them incompatible with today’s fuel prices, energy efficiency requirements or standards of comfort. Before these improvements almost all homes at The Lanes had an energy performance certificate (EPC) rating of D or below, with 98 homes being in band E or F. With this work completed, of the 175 homes reassessed to date, 73% now have an EPC rating of band B or C.

Sean Corcoran, Regional Director at EQUANS, said: “With energy costs rising, it’s more important than ever that the public and private sectors come together to make the UK’s homes warmer and more energy-efficient.

“Using EQUANS experience to support Rotherham Council’s zero carbon ambitions has been great. Our site team worked incredibly hard to ensure the project was completed in time for the Government funding deadline.”

Rotherham Council’s Cabinet Member for Housing, Cllr Amy Brookes, commented: “I’m glad we have been able to make this investment in The Lanes for its residents — the improvements will have a real impact in making their homes more comfortable and cutting heating bills. Given the recent increase in energy prices, this will be even more vital this coming winter.

“It’s good news in terms of meeting our borough’s environmental targets as heating homes is one of the biggest sources to domestic carbon emissions.

“The Council has recently applied to the Government’s Social Housing Decarbonisation Fund in a bid to improve the energy performance of more council homes. We recognise that making all Council properties energy-efficient is a huge task and we hope the Government will support this work by releasing further funds without delay.”

As part of its commitment to giving back to the communities in which it works, EQUANS also installed a boiler in The Lanes Community Centre, with staff also carrying out redecorating work to the building.