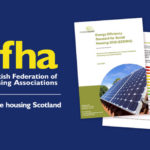 A new report released today by the Scottish Federation of Housing Associations (SFHA) has found that an energy efficiency standard for social homes, to be met by 2032, which aims to tackle fuel poverty, would only reduce the total percentage of households in fuel poverty from 38% to 29%, despite costing housing associations an estimated £2bn (1). As a result of the research findings, SFHA is calling on the Scottish Government to carry out an urgent and comprehensive review of the Energy Efficiency Standard for Social Housing Two (EESSH2).

EESSH2 is a follow up to EESSH, which was created to help remove poor energy efficiency as a driver for fuel poverty and to contribute to achieving the Scottish Government’s climate change emissions reduction targets. EESSH had a minimum rating milestone and target date of 31st December 2020, and EESSH2 is to be met by 31st December 2032. The standard is based on the minimum Energy Performance Certificate (EPC) rating. To reach EESSH2, all social housing would need to meet EPC band B (Energy Efficiency rating) — or be as energyefficient as practicably possible, within the limits of cost, technology and necessary consent — by the end of December 2032.

SFHA commissioned environmental charity Changeworks to carry out research on its members’ experience of EESSH and EESSH2. The research was carried out before EESSH’s December 2020 target and found that only 16% of members would fully comply with it, with a substantial number (89%) having temporary exemptions in place.

Most organisations said that COVID-19 had impacted on EESSH and EESSH2 plans and progress. The most common impact was a delay to timescales, with housing associations noting this was affecting future plans. Delays were said to be due to several factors, including the inability to access properties to install measures, carry out surveys, or produce EPCs.

The research also found that only 7% of housing association stock currently meets the target rating for EESSH2. Installing all of the standard’s applicable improvements to the remaining properties, including insulation and boiler upgrades, would see this rise to 41%, leaving 59% of the stock unable to meet the target rating.

Looking at EESSH2, the report found:

Sally Thomas, SFHA Chief Executive, said: “The social housing sector has the most energy efficient homes in Scotland, and the Scottish Government’s energy efficiency standards have helped to drive this. Good quality, warm, energy-efficient homes have a key role to play in helping to tackle climate change and fuel poverty, and our members are working hard to try and combat these issues and to meet the Government’s targets. However, it’s clear from our research that considerable challenges stand in the way of our members meeting the EESSH2 target such as funding, measurement methods and timescales.

“We are keen to work with the Scottish Government, so we can find a solution to these challenges, and our members can continue to increase the energy efficiency of their homes, tackle fuel poverty and play their part in contributing to the net-zero and climate change targets.”

Teresa Bray, Changeworks’ Chief Executive, commented: “Changeworks is delighted to work with SFHA on this new research at this crucial time for integrated climate action. What is clear is the size of the challenge we face, not only in the social housing sector but across Scotland.

“We need to ensure a just transition to affordable low carbon homes for everyone by increasing energy efficiency without increasing fuel poverty.

“We look forward to working with SFHA members to do just that — to increase the energy efficiency of their homes, reduce fuel poverty and contribute to net-zero.”