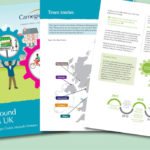 Struggling towns can turn around their prospects by acting now to secure their future, according to a new study by the Carnegie UK Trust. The Trust’s Turnaround Towns UK report highlights how towns can overcome a lack of political power and declining economic fortunes by re-imagining their circumstances and adopting principles for change.

With two in five people living in towns, which have become a major political battleground in the forthcoming General Election, the Carnegie UK Trust’s study uses nine positive case studies to lift the lid on how communities, local councils and businesses can unite to effect change. The seven common principles are:

Pippa Coutts, Policy and Development Manager at the Carnegie UK Trust, said: “Despite two in five people living in towns, in the last decade policy and funding has focused on cities. There are signs this is changing, with the recently launched Towns Fund, and commitments to towns in party manifestos. But many towns are desperately seeking advice and inspiration on how to make the most of new opportunities.

“Town planners and authorities should think of this report not as the answer to their problems, but as inspiration for change. It is the first time anyone has identified genuine common ground across flourishing towns in the UK — and published practical inspiration for others.

The nine towns involved in the study covered every nation in the UK and feature a host of imaginative changes that have helped each location to flourish. These include hosting festivals; restoring castles as tourist attractions; commissioning films; reclaiming a high street; embracing industrial change; and even ‘guerrilla gardening’.

The towns featured are West Kilbride and Dumfries in Scotland; Portrush in Northern Ireland; Cardigan in Wales; and Morecambe, Todmorden, Grimsby, Wigan and Totnes in England.

Pippa added: “Towns need policy support and sustainable funding to address their different strengths and characteristics. Too often, however, towns are in competition with each other or, worse, with major cities, for resources and influence. Our Turnaround Towns UK report encourages communities and local authorities to take control of their own destiny, while reminding national policy makers of their responsibilities to take towns seriously.”

The Carnegie UK Trust identified ‘Flourishing Towns’ as one of its thematic priorities for 2016-2020. The organisation has been supporting the development of vibrant, innovative and empowered town communities throughout this time.