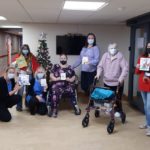 School children in Helston, Redruth and Camborne and children from Coastline’s homeless families facility have been coming together to make Christmas cards for Coastline Housing residents in a bid to spread a little happiness this year.

Colleagues at Coastline worked with a number of local schools to ask children to make and share a card that could be given to a Coastline customer who might be experiencing loneliness or isolation this year.

They received 352 cards from classes at Trewirgie School in Redruth, Nansloe Academy in Helston and Weeth, Roskear and Penponds schools in Camborne. The children of families living in supported accommodation run by Coastline’s Homeless Service also joined in to make some cards.

They were packaged with a Christmas message from CEO Allister Young and handed to customers living in supported schemes in Redruth, Camborne, Helston and Pool. A number of cards were also delivered to new customers who have moved into a Coastline house within the past three months.

The initiative encouraged the children to get creative and to spread a little kindness, thinking about issues of loneliness and isolation some people might be experiencing due to the Covid pandemic and how they could help make a difference.

Sally Wears, Community Navigator at Coastline Housing, said: “It has been an absolute pleasure to get involved with local school children and see just how much effort and thought they have put into this initiative. We have been delivering the cards across our supported housing schemes and it’s been delightful to see the joy they have been putting on customers’ faces.”