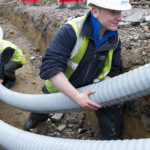 Call for government to fill the renewable heat policy gap

Following reconfirmation that the Non-Domestic Renewable Heat Incentive (RHI) scheme will expire after March 2021, REHAU is calling on the Government to take action to avoid a policy gap around the uptake of low carbon heating in building projects.

The reaffirmation of the scheme’s ending by the Department for Business, Energy and Industrial Strategy means specifiers and developers will be hindered in their efforts to decarbonise. Specifically, those looking to install renewable heating systems on commercial buildings or small-to-medium-scale district heating projects will be without key financial support until the Green Heat Network Scheme (GHNS) comes into force in April 2022.

With this in mind, Steve Richmond, Head of Marketing and Technical for REHAU Building Solutions, is calling for the Government to clarify how they intend to support non-domestic renewable heating schemes for the year before the GHNS takes effect.

“The existing non-domestic RHI scheme is a vital motivator for small and medium-sized clients and developers looking to install renewable heating technology like heat pumps and district heating schemes,” says Steve. “The fact it is being wound up without an immediate replacement is therefore very concerning, but disruption could be potentially mitigated if the Government were to provide more details on what options are available pre-GHNS.

“As members of the Association for Decentralised Energy (ADE) and the Heat Pump Federation (HPF), we are very aware of the potential adverse effect this upcoming disruption could have on the supply chain. For example, clients may be pressured into rushing prospective work to completion ahead of the March 2021 deadline, and projects using renewable heating technology after may become less financially viable.”

As well as placing supply chain jobs potentially at risk, Steve believes the current lack of clarity around renewable heat installations is slowing adoption of low carbon solutions required for the UK to hit its decarbonisation targets. “As a country, we are committed to achieving net zero carbon emissions by 2050, and though we’ve taken great strides in renewable electricity, renewable heating is lagging behind.

“Steps are being taken to decarbonise the UK’s heating grid through measures, such as the Future Homes Standard, but more needs to be done before 2025. This is a critical time to support developers, specifiers and installers using renewable heating technologies, but this current policy gap could undermine those efforts.”

Though the UK is phasing out gas boilers in new residential developments from 2025 under the terms of the Future Homes Standard, prominent industry voices are encouraging the Government to go further. For example, the Confederation of British Industry has recently advocated for all gas boiler installations to be banned by 2025, and encouraged the use of technologies such as heat pumps and district heating instead.

Steve concludes: “Decarbonisation is very much the watchword across industry at the moment, with companies looking to improve the sustainability of their operations as a priority. However, in order to make as much progress as possible, the Government needs to take further action and provide additional details to existing plans around renewable heat.

“Steps such as reviewing subsidies which affect gas and electricity prices would likely encourage uptake of renewable technologies by increasing cost savings for end users. Additionally, providing additional consultations and information on the GHNS would help developers and specifiers make key project decisions ahead of April 2022.

“We at REHAU are under no illusions that there is plenty to do to remain in accordance with the Government’s ambitious decarbonisation targets, but in order to achieve these goals, more support is needed.”

For further information on REHAU’s pre-insulated pipework systems, and their use in heat pump and district heating networks, visit www.rehau.uk/districtheating