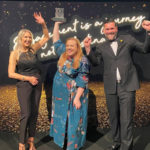 Cairn Housing Group named one of the best UK employers

Cairn Housing Group is celebrating after being named once more as once as one of the best companies to work for in the UK.

The Edinburgh-headquartered organisation was named in the list of the 100 best not-for-profit employers in The Sunday Times Best Companies Awards — the third year running it has picked up the accolade. The Awards recognise organisations for creating a workplace where employees feel valued and motivated.

The survey, which this year included colleagues from subsidiary ANCHO alongside Cairn Housing Association staff, was completed by 90% of employees and analysed engagement across all aspects of working for Cairn and ANCHO, from relationships with managers to giving something back to the community.

Ley-Anne Forsyth, a Housing Officer in Cairn’s Inverness office, who travelled down to the award ceremony in London said: “It was inspiring to hear about other not-for-profit organisations that had also picked up an award.

“We received a special commendation for our work with tenants who have mental health issues. This is the reason we all come to work, to help our tenants as best we can, and it felt particularly special to have that recognition for our frontline teams.”

Michael Allan, Cairn’s Chairperson commented: “It’s a wonderful result for the Cairn Housing Group to be counted in the top 100 best not-for-profit organisations to work for in the UK for the third year running.

“We know that having engaged staff makes for a happier workplace and better services to customers. Building on these high levels of employee engagement year after year is a great achievement and acknowledges the hard work and commitment of our team.”

0 0 0 0
Previous : First Spade in the ground as redevelopment of Burnham Grammar School begins
Next : Number of rough sleepers in Southampton goes down as national figures also fall