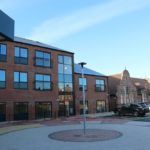 Bromford, one of the largest housing associations in the Midlands and South West, has today finalised a £100m private placement with five North American investors.

As the housing provider steps up plans to deliver more than 1,000 new homes each year, the nine-figure finance package was secured on a 20-year maturity and was priced at 135bp over Gilts, generating an all-in coupon rate of 3.01%. This reflects one of the most attractive issues in the sector over recent times and, impressively, the pricing lands inside the secondary trading levels of Bromford’s UK public bond secured in April 2018. The initial orderbook was three and half times subscribed, highlighting the strong level of interest from investors despite the prevailing uncertain economic climate and unprecedented difficulty recently observed in the UK markets.

The deal was finalised after senior management roadshows across London, the US and Canada and an investor visit to Bromford’s UK base including a tour of its newly-opened retirement living scheme in Worcestershire. Two of the investors have never previously invested in the UK social housing market and were said to be “really engaged” with the 44,000-home landlords plans to deliver 14,000 new homes across its operating area in the next decade.

Imran Mubeen, Bromford’s head of treasury, said: “We have been following the North American market for a while and were keen to leverage the sharper levels of pricing whilst diversifying our investor base. It was particularly important to engage with investors directly on the roadshows to highlight the strengths and opportunities associated with the UK social housing sector and the Bromford credit profile specifically.

“We were delighted to receive a strong order book across a range of tenors with a competitive covenant package which is a testimony to the continuing strength of our financial position and business plan. We were particularly pleased to bring new investors to the sector and to price inside of our UK public bond which we see as a paradigm shift for UK social housing. The deal was been expertly handled by our partners NatWest Markets, JCRA and Trowers.”

Bromford’s chief financial officer, Lee Gibson, added: “This new funding complements our debut public bond of last year and it places us in a fantastic position to continue investing in our existing customers and realise our growth and development objectives for future customers.”

Henrietta Podd, director at JCRA, said: “We are delighted to have supported the team at Bromford in another successful financing, following its debut public bond last year. We are great supporters of the US private placement market as we believe it offers rated, high quality associations substantial advantages on price, while providing considerable flexibility on covenants. A roadshow in the US allowed Bromford to take maximum advantage of this to obtain funding on better terms than would be available in the UK.”

George Flynn, vice president of NatWest Markets, added: “We’re pleased NatWest Markets was able to help Bromford meet its financing targets and raise £100m from several US and Canadian investors, including two that are new to the UK social housing sector. The transaction’s competitive pricing and oversubscribed orderbook bears testimony to the continued investor appetite for companies with strong credit ratings, and highlights the importance of a well-structured and considered approach to the private placement market.”

Header image: School Gardens retirement living scheme in Worcestershire where North American investors recently visited as part of a series of investor roadshows both sides of the Atlantic. School Gardens officially opened to residents in summer 2018