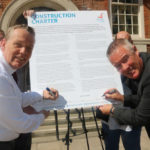 Barking and Dagenham leads the way for London construction standards

The London Borough of Barking and Dagenham is the first council in the capital to throw its weight behind Unite’s pioneering Construction Charter.

Construction firms planning to work on Barking and Dagenham building projects will now need to meet the standards laid down in the charter. The charter commits to working with Unite in order to achieve the highest standards in respect of direct employment status, health & safety, standards of work, apprenticeship training and the implementation of nationally agreed terms and conditions of employment.

Cllr Darren Rodwell, Leader of Barking and Dagenham Council joined Vince Passfield, Unite Deputy Regional Secretary at the Town Hall in Barking to sign the charter on the 4th July.

Vince Passfield, Unite Deputy Regional Secretary for London and Eastern said: “Barking and Dagenham is the first London borough to back Unite’s pioneering Construction Charter. The charter combines the council’s procurement power with Unite’s influence in the workplace to ensure construction projects under the control of the borough meet the highest standards.

“Workers will have the right to speak out on safety issues and be paid a fair rate for the job. The charter means there will be no blacklisting of workers.

Vitally, the charter also protects workers from the scourge of bogus self-employment. It ensures construction workers are directly employed instead of paying £20-30 a week to payroll companies just to get their wages.

Cllr Darren Rodwell, Leader of Barking and Dagenham Council said: “We’re proud to be the first London council to sign Unite union’s Construction Charter, paving the way for many other London boroughs to get on board and ensure best practice is adopted across the capital.

“We’re an ambitious borough and there’s plenty of development to come for the benefit of our local residents. It’s important that while setting our sights on these new developments, we’re committed to making sure that workers aren’t exploited, are paid fairly, and that in our pursuit of growth no one will be left behind.

“We’ll be writing to all the contractors we work with to make it clear that if they want to do business with us, they need to get on board and act in a manner that is socially responsible.”

Pat Hayes, Managing Director at Be First, added: “As a council-owned company we are committed to ensuring that our staff and those working for companies who work for us have the benefits of union membership and the safest working conditions.
“We are very pleased to sign up to the Unite Charter and to work towards getting our supply chain to comply with it.”

Pictured above is Cllr Darren Rodwell (left), Leader of Barking and Dagenham Council and Vince Passfield (right), Unite Deputy Regional Secretary signing the Charter at the Town Hall in Barking.