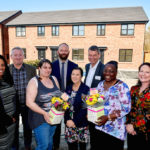 Mayor of Salford, Paul Dennett said: “What’s great about this scheme is that Arcon is delivering homes for social rent, and that’s not happening at the scale I want to see nationally, or in Greater Manchester at the moment. To give you some indication of the scale of the challenge we’ve got 97,000 people on our housing waiting list across Greater Manchester.”

Paul continued: “Today we are celebrating eight social rented properties, eight affordable rented properties and five shared ownership, in this mixed development — this mixed community, with decent services in and around this area. This is what I believe in: mixed housing markets that ultimately respond to need. No one should be on housing waiting lists if they need a roof over their heads, and no one should be sleeping rough on our streets or be homeless.”

Paul added: “Thank you so much to Arcon Housing and Bellway for delivering this scheme. We’ve got so much more of this to do, but I genuinely believe this is the right model for housing in 21st Century Britain, we just need more people doing this across Greater Manchester.”

Ian Ankers, the new Managing Director of Arcon Housing said: “Today we are marking the next phase of Edenfield, delivered in partnership with Bellway Homes. On this one site we’re meeting a range of needs, and if you look around you can’t actually see any difference between each type of tenure of property, and that’s really important to us. At Arcon we believe in communities coming together, no matter what tenure the property, and everyone pulling together as one community.”

The celebration comes just over a week since Arcon Housing announced it is joining the Bolton at Home Ltd Group as a subsidiary, with a group ambition to deliver 1,400 new homes by 2023.

Also present, Bolton at Home Group Chief Executive Jon Lord commented: “I definitely believe that mixed tenure is the way that social housing should be delivered moving forward. Arcon’s recent joining of Bolton at Home will give business and financial heft to what was a small organisation. This will give them the capacity to deliver a lot more homes, but also to tap into what we’re doing around community investment.”